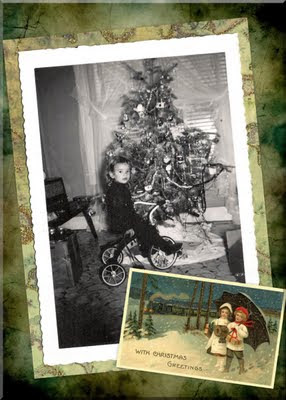 Dear Grandma and Grandpa Henry, Thank you for my new tricycle. I want summer to hurry so I can ride it outside. I love you. X O X O X Vickie

On the radio in 1953, we might have been listening to Bing Crosby singing White Christmas, or Eartha Kitt singing Santa Baby, or 10-year-old Gayla Peevey singing I Want a Hippopotamus for Christmas.

And mayhaps we watched A Christmas Carol on Kraft Television Theatre on the small black and white television in the living room.


NBC's 1953 broadcast of the Christmas-themed "Amahl and the Night Visitors" was the first sponsored program to be broadcast in color. And, of course, there was the string of variety specials featuring the likes of Perry Como, Andy Williams, Bing Crosby, and Bob Hope.

When we were kids, Daddy usually went out and cut down the tree that would adorn the living room in our little home. I can remember going out with him at least once to choose and chop down a tree from the pasture out in the country, and bring it home to Mom. I just love that we have this black and white image of one of our Christmas trees from the early 50s. 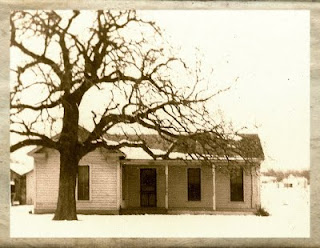 Mom spent a large number of her growing-up years living with her paternal grandparents in this house in central Texas. She remembers that they strung popcorn for decorating the tree that usually sat in a little entry-way near the front door of the house.

Mom recalls desperately wanting a pair of roller-skates during the early 1940s. Her father had remarried and was still living in Massachusetts. Due to metal shortages during the war, roller skates were not easy to find. She remembers being told that her father was relentless in his search for this gift for her, and that he was somehow able to find and secure the object of her desire -- the roller skates were delivered to her in Texas.

Posted by BeNotForgot at Tuesday, December 01, 2009

Vickie,
your thank you letter brought back such memoriess -- of my scrawly notess, to my children's painstaking handwritten notess, and now my grandchildren whip off thank you cards from their computers.