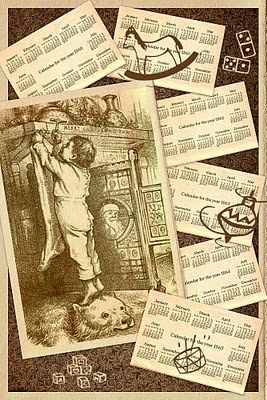 On the 24th day of December in the year 1865 . . . The little woman drove up town and purchased divers and sundry toys to be distributed to the children to night by way of presents from St. Nicholas put into their respective stockings.


The quotes above and below, regarding Christmas Eve during the years 1860 through 1865, are excerpts from a daily Journal kept by James Madison Hall (1819-1866).

During this time period, Hall was married to a 2nd great-grand-aunt of the Keeper of this family history blog, who was delighted to find in these daily recordings multiple mentions of some of her 2nd and 3rd great-grandparents, as well as other kith 'n kin.

Monday Dec. 24th 1860. I am still in Liberty and at work in the store, doing but little business. The steamer Swan left for Galveston to day, leaving me behind. I am however passing my time quite pleasantly, weather cool, cloudy & rainy. [Liberty, Texas]

Tuesday December 24th 1861. Today I am engaged in the ware house. I made the boys kill and salt down 1060 lbs. pork. weather clear & cold. I patrolled at night. [Liberty, Texas]

Wednesday December 24th 1862. To day I drove my horse Gladiator and buggy down to Mothers [i.e., Mahala Lee Sharp Hall nee Roberts, my 3rd great-grandma, and stepmother as well as mother-in-law to JMH] and brought up a basket of glass ware. In the evening the little woman [i.e., Margaret A. Hall Stewart nee Sharp] drove down to her Mothers [Mahala] and back to try the horse and buggy. I purchased from Mr. Renfro some fodder & peat. weather cloudy, warm and showery. [Houston County, Texas]

Thursday December 24th 1863. To day the boys are still at work on the stables. I sent John over to Rives; still after the demijohn & wallet also for some whiskey but he did not get any in consequence of the still house having been having been robbed the night before. I ground 12 bushels of corn, and Sam [i.e., Samuel Houston Sharp, my 2nd great-grandpa, as well as stepbrother AND brother-in-law of JMH] ground 3 bushels of wheat. In the evening Capt. Peacock and I rode down to Fathers [i.e., Col. Joshua James Hall] and back. Times are quite brisk at the house preparing for Christmas dinner.* Weather changeable & cool with occasional showers of rain. [Houston County, Texas]

Saturday December 24th 1864. To day the boys assisted me at the mill we ground 4 bushels of wheat & 23 bushels of corn. Weather cloudy & cool with occasional showers of rain. [Houston County, Texas]

Sunday December 24th 1865. To day I am very busy at work at the warehouse. We shipped 146 B/C [i.e., bales of cotton] by an extra train of the T.&N.O. R.R. for Houston. The little woman drove up town and purchased divers and sundry toys to be distributed to the children to night by way of presents from St. Nicholas put into their respective stockings. Weather variable and cool. [Liberty, Texas] 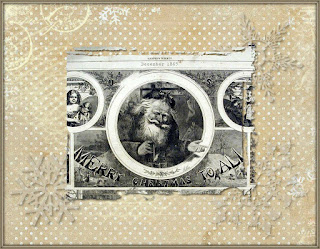 *Preparing for Christmas dinner during this time period would most definitely have included gathering the ingredients for making egg nog ... and since today, the 24th day of December, just happens to be National Egg Nog Day, I am including a receipt for egg nog that is similar to one I found in a cookbook from the years of the war between the states.

Posted by BeNotForgot at Thursday, December 24, 2009

Wow! That's a pretty potent recipe for egg nog! (grin) My Mom used to make a similar recipe of my Grandmothers, less the cognac.

Have a very merry Christmas!

I loved reading those old diary excerpts! to be able to see a glimpse into their everyday lives, what a treasure that is!

I would be so excited to find something like that for one of my ancestors!

May you and yours have a very Merry Christmas!