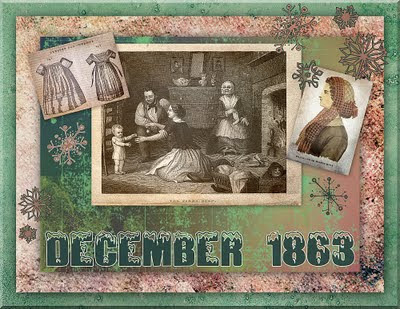 
Tuesday December 15th 1863. Today Sam and the boys finished the floor in the mill forebay and let down the gates to catch a head of water. The little woman was taken sick and at 11½ o'clock a.m. was delivered of a female child. She may truthfully be said to be a woman of ready conception and easy delivery. there were present Mrs. Bird, Mother [i.e., Mahala Lee Sharp Hall nee Roberts], Nellie [i.e., Mary Alexandrien Sharp nee Lemaire] and myself, assisted by Rachael a negro woman. I sent for Dr. Murchison, who came but as usual too late to be of any service in his profession, he remained for dinner and then left for home. Weather cloudy with occasional showers of rain and a hard rain at night. . . . Thursday December 17th 1863. . . . The little woman is doing very well after her confinement. Mother is still here attending to the new responsibility, whom we have this day named Josephine Martha Hall. . . .

The above information about little Josephine's birth is from entries in an 1860-1866 daily Journal kept by her father, J.M. Hall. Regarding the Christmas immediately following the birth of his 2nd daughter, Hall penned the following words :-


Friday December 25th 1863. Today being Christmas all order of business was suspended and we all went in for a regular jollification. I had with me to partake of our Christmas dinner Father [i.e., Col. Joshua James Hall], Mother, Capt. Peacock, Mrs. Bird, Mr. Leaverton, and sundry others besides the home folks. the egg nogg flowed freely and all went off as merry as a marriage bell. To close the scene at night the negroes had a ball in the yard by moon light. they touched the light fantastic ? and were as happy as happy could be. . . .

Even with all the sorrow that hangs,
and will forever hang, over so many households;
even while war still rages;
even while there are serious questions yet to be settled -
ought it not to be, and is it not,
a merry Christmas?
Harper's Weekly, December 26, 1863 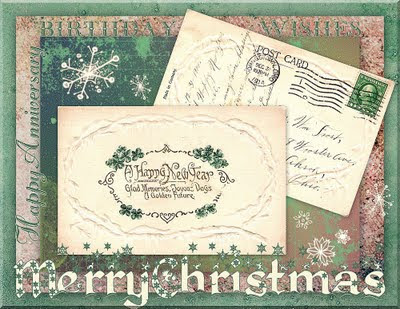 
This divided back card was made in Germany, and bears a one-cent postage stamp. The card is in the private collection of the Keeper of this family history blog, and sends wishes to the recipient for a Happy New Year in 1915. This collage incorporates further expressions of celebration -- Merry Christmas -- Happy Anniversary -- Birthday Wishes -- which also ties it into the theme for today's entry for the Advent Calendar and the COG (see below). And in keeping with the white theme for the Festival of Postcards, even the recipient's surname -- Frost -- calls to mind the (non)color of white!

This post incorporates two Season of Christmas collages with supporting information, and was prepared for the following 2009 community events in the geneablogging world :-

Posted by BeNotForgot at Tuesday, December 15, 2009

I love this. I can picture the Christmas festivities in my mind.

Hello Vickie,
Thanks for participating once again in the Festival of Postcards. You seem to be leading the way for others to experiment with mail art and I look forward to seeing more of your work (whether for the Festival or not). You can visit the Festival of Postcards (6Ed.)White here:
http://wp.me/pp92w-77c
You will see that there are problems with your "blurb". I am aware of them but at the moment I cannot do any edits without losing all the images - in other words, I must stay on the version with errors. I am looking for a solution to this but for the moment I felt I needed to go ahead and publish. My apologies!
Evelyn in Montreal