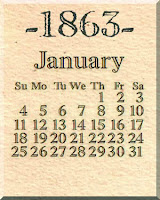 On this date in our extended family history . . . the 25th day of January . . . in the year 1863 . . . James Hall Sharp is born in Houston County, Texas. The details of his birth were recorded by James Madison Hall (1819-1866) in one of a series of almost daily writings kept by him during the time period of the war between the states. The new parents -- Sam H. Sharp and his wife, Mary A. Sharp familiarly called Nellie -- are 2nd great-grandparents of the Keeper of this geneablog. Mahala aka Mother is the mother of Sam as well as of Hall's wife, Margaret aka the little woman, and is, therefore, my 3rd great-grandma.

Sunday, January 25, 1863. Today at 8 o'clock a.m. Sam H. Sharp's wife Mary A. Sharp familiarly called Nellie, was delivered of a male child, which weighed 7¾ lbs. which said child was by his parents named James Hall Sharp in honor of the writer of this journal, and at said delivery there was present Margaret A. Hall, Mahala L. Hall, Mrs. L. A. Bird, Sam H. Sharp & myself assisted by two negro women both by the name of Louisa. Nellie sustained herself very well under the circumstances and had rather an easy time than otherwise. The child aforesaid by way of nick name we dubbed & created "Major" ... in order to distinguish him from the little woman's child James, alias Jim. Mrs. Bird returned home on the evening, Mother however remained. Weather changeable and warm, with occasional showers of rain, rendering it very disagreeable.