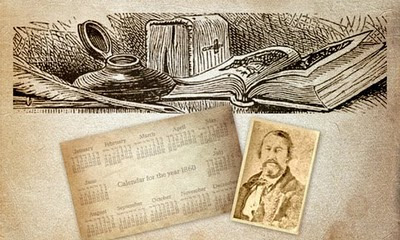 Tuesday January 1st 1861. Today I am still in Galveston, and adjusted my matters of dispute with Nelson Clements. I left Galveston at 3.P.M. on the steamer Ruthven bound for Liberty in company with James Wrigley and had a very pleasant passage. expenses while at Galveston $20. weather clear & cold. [Galveston, Texas]

Wednesday January 1st 1862. To day I am busy in the Warehouse. I assisted however in placing five of the cannon, balls and carriages on the steamer Ruthven to be taken to Galveston. weather changeable & cool. [Liberty County, Texas]

Thursday January 1st 1863. Today Sam Sharp [i.e., Samuel Houston Sharp -- my 2nd great-grandpa] went to Crockett for the purpose of hiring a negro boy, but returned home without doing so. Mother [i.e., Mahala Lee Sharp Hall nee Roberts -- my 3rd great-grandma] sent Louisa up to assist the little woman [i.e., Margaret A. Hall Stewart nee Sharp -- Sam's sister, & Hall's wife] in preparing and putting up her sausages. as I have now got the entire control and possession of my mill I contemplate jotting down her earnings and out lay for the current year. it is agreed however between Sam Sharp & I that he shall act as the miller, I attending only during his absence. Nellie [i.e., Mary Alexandrien Sharp nee Lemaire -- my 2nd great-grandma] is still sick but improving. I ground ten bushels of corn. weather cloudy & rather warm on my pork, with a shower of rain at night. [Houston County, Texas]

Friday January 1st 1864. This being the first day of the current year, I commence my notes of the events that take place immediately around me, and in which I have any interest. The boys are at work chopping and hauling wood, which is very essential during the present cold spell. Sam [Sharp] & I ground 17 bushels of corn and 10 bushels of wheat. Weather clear and bitter cold. I think some what colder than yesterday. I thought I would freeze at night although I kept a fire in my room the whole time. [Houston County, Texas]

In many ways, the events that made news in Galveston in 1864 were not that different from the events that make news today: weather, scandals involving those in authority, and a series of bizarre deaths and crimes. With military attention focused on campaigns and battles in other places, the civilian and military inhabitants of the city concentrated on making the most of their lives in the confines of an occupied city. It was not an easy task. The year started out with one of the coldest winters on record. The western part of Galveston Bay was covered with ice to a depth of as much as an inch-and-a-half in thickness. Snow fell and accumulated on the ground to a depth of one inch, an almost unheard of event in Galveston. The cold weather continued throughout the winter months, with one storm from the North following another. The weather caused much suffering for soldiers and civilians who were without sufficient firewood to keep warm or cook their meals. This problem became so acute that orders were issued allowing vacant houses and unused wharves to be torn apart and used as fuel. . . . from Battle on the Bay by Cotham . . .

Sunday January 1st 1865. Today I commence my notes of daily events that may happen immediately around me during the current year just began. Though they are of no interest to any one safe my own family. Nevertheless I cheerfully enter upon my task. We all left home and rode down to Mother's [Mahala] where we spent an agreeable day, returning home in the evening. A sick soldier stopped with us for the night. Weather clear and rather warm for the season of the year. [Houston County, Texas]

Monday January 1st 1866. Today I commence my notes of events that may daily happen immediately around me during the current year. This notes are not intended to be of any service to any one except myself as a book of reference and to my family as a faithful exposition of my daily transacting. I formed & entered into a copartnership with James Wrigley to carry on in the town of Liberty a general Commission and Warehouse business. The Steamer Kate & sloop Luna left for Galveston. The little woman had a fine new year's dinner, which reflected great credit upon her art as a house keeper. I entered into a contract with negro man Albert to work for the year at 15$ per month with board, he furnishing a negro woman to cook. I also employed my old servant Hicks for the year at 10$ per month. Weather cloudy & cold with incessant rain throughout the entire day. [Liberty County, Texas]