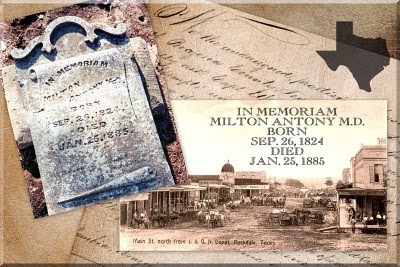 
Dr. Antony is my 1st cousin five times removed . . . and he is also the husband of the older sister of my 2nd great-grandma, Josephine Wingfield Henry nee Davis (1842-1899) . . . he is buried in the Old City Cemetery, which is just out of sight at the bottom edge of this postcard.


Dr. Milton Antony, Jr. was a Confederate Surgeon in Brazoria County, Texas during the years of the war between the states . . . then relocated to Milam County, Texas where he was the third Postmaster in Rockdale, serving 06 June 1876 to 26 April 1877 . . . which was one month after the entire wooden portion of Rockdale burned . . . he was a practicing physician in both Cameron and Rockdale . . . a Henry family reunion write-up in a 1931 edition of The Rockdale Reporter states that . . .

On Oct. 3, 1876, the Henrys [my 2nd great-grandparents] arrived in Rockdale to visit a sister and family of the Mrs. Henry's, it being Dr. and Mrs. M. F. Anthony, who at that time had the post office and drug store combined on the corner where the Wolf Hotel now stands.


That is the Wolf Hotel on the right corner of the Rockdale postcard. The Wolf sat on the northeast corner of the intersection of Main and Milam. According to a history of Rockdale published in 1936, a two-story stone and brick bank building was erected in 1875, which later became the Wolf Hotel, and then, ca. 1935, the American Legion Hall. An 1885 map of Rockdale does show a bank at that location, and on the corner across the street is a post office in the Mundine House.


A year before Josephine arrived in Rockdale to visit her sister, Margaret, the following item appeared in the 12 November 1875 issue of the Galveston Weekly News . . .


There are street fights occurring (in Rockdale) almost every day and the officers of the law seem to enjoy it, taking their fines, never giving offenders the least word of warning or lecture. Nothing better could be expected when they license women of ill fame for ten dollars a month and receive half of the fines and their compensation. The most disgusting of it is, when they choose, these officers step beyond their authority and utterly disregard the law at pleasure. Every day or two some very interesting scenes occur in the pettifoggeries of Rockdale.


delightfully located in a thriving section of the county. . . . there are two or three banks, fifty or sixty merchants, and plenty of saloons, and has generally all the appearances of a railroad town. . . . While all is new and in some degree crude, there are some fine stone and brick buildings. . . . Where a population of eighteen hundred now thrive, was ten months ago the home of the deer, and the pleasure ground of the black bear.


For more information about Dr. Antony and his family, see . . .

P.S. The handwritten paper in the background of the collage is a document from 1864, signed by Milton Antony, M.D. and three other doctors -- requesting the Confederate army to excuse the only druggist in Brazoria County, Texas from being conscripted into the army . . .

What an amazing description of the town! My goodness!

Thanks for stopping by, Beth & Lori -- we have a loonnngggg history in this area. This is my hometown, full of oodles & oodles of my kith & kin, with roots in the area before Rockdale even became Rockdale in 1874.

In reading about that time period, I have actually had several encounters with some form of the word "pettifoggeries" -- neat word!

Vicke,
The way you tell the story is very interesting. The icing on the cake is the artistic way you format your blog. The collage is great, eye catching ---- and makes me envious of your ability. I also like the way you use spacing, fonts and formatting. Very, very nice.

I have such a long way to go to understanding how to do such lovely things that makes your stories even better. Thanks.