COG Swimsuit Edition :: At the beach 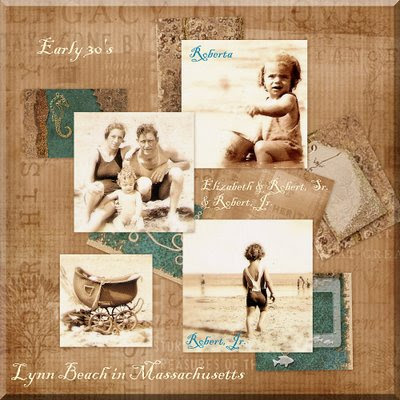 Robert Henry was born in Milam County, Texas in 1905, and had been working as a cowboy in West Texas before travelling to Dallas, Texas in 1927 and enlisting in the United States Navy. It is highly doubtful that he had ever seen the ocean before making that drastic change in his lifestyle.

While in the Navy, he met and married the 17-year-old Maine beauty who was to become my maternal grandma -- Elizabeth Marilla Smith. They married in July of 1929. Their son was born in May of 1930. Robert was discharged from the Navy in January of 1931. Mom was born in January of 1932. And Elizabeth died 3 days later.

Based on the photos we are blessed to have in our family, it would seem that they must have spent a large portion of their very brief time together playing on the sandy beaches of Lynn, Massachusetts, as well as at Lake Winnipesaukee in New Hampshire. One of the tidbits of information that was passed to my Mom about her mother was that Elizabeth was a talented swimmer, and loved the water.

This blogpost created for the . . . 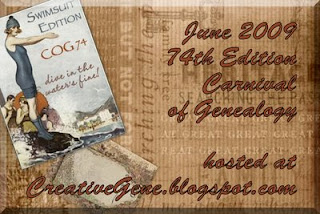 I continue to be in awe of the presentation of your blog information. I always feel like I am looking through a scrapbook. I can only imagine the amount of time you spend on each blog. WELL DONE!

I love your scrapbook page, Vickie! It's beautifully done! And your graphic for the COG is fantastic too :-)

Liked all the pictures but whoever
took the kids' pictures really did a
great job!