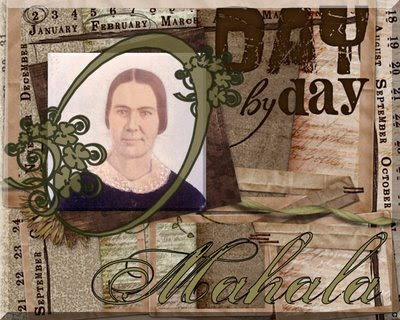 By the time Mahala was 10 years of age her family was living in the Ayish Bayou area of Coahuila y Tejas, where Mahala would grow up in a house that fronted on the public highway (El Camino Real / King's Highway) coming into Texas. The Elisha Roberts home was frequented by many overland travelers, and while known far and wide for its hospitality, there is also a record of a murder or two on Elisha's property -- ca. 1826 or 1827 -- when a Matthias Yokum and his brother-in-law, James Collier, were killed by a man reported to be named Charles Chandler.


During Mahala's teenage years, her father was elected as Alcalde of Ayish Bayou (1831), as well as being a delegate to the 1833 convention at San Felipe de Austin. During the Texas Revolution, this household furnished provisions, lodging and transportation for the revolutionary cause. Mahala was 19 years old at the time of the Battle of the Alamo (1836), and when Gen. Sam Houston was wounded at the Battle of San Jacinto shortly thereafter, he spent a part of his recovery period in the household of our Elisha.


On 22nd March 1838, a 21-year-old Mahala became the wife of John M. Sharp (age & further info unknown at this time). Their son -- Samuel Houston Sharp (1839-1885) -- was born the following year, followed by a daughter in 1840, and sometime after that birth, our John M. Sharp disappears from all records we have been able to research.


In 1844, Mahala's father dies, followed by the death of her sister, Elizabeth, in May of 1845, and then her Mother, Patsy, the following December -- just 9 days before Texas is annexed as the 28th state of the Union. In 1846, Mahala is listed on the tax list for San Augustine County, indicating she is head-of-household. In 1847 her sister, Anna, dies in Austin County.


On the 1850 Census for San Augustine County, Mahala is enumerated as living next door to Lt. Governor John A. Greer. In February of 1851, Mahala marries a much older Joshua James Hall, and they set up housekeeping on the Hall Plantation in Houston County, Texas.

. . . In 1850, he (J. J. Hall) married his third wife, Mahala Roberts Sharp, a widow who came to Houston County before 1835. She was the daughter of Elisha Roberts, an early Spanish Alcalde, of San Augustine, Texas. To this union were born two children, a daughter Roberta, born 25 May 1852, and a son, Horace was born 22 Sep 1854. Both of these children were born on the Elkhart Creek Plantation. Horace was called 'Toby' by the slaves. He was very close to these people and he always included them as his friends. Joshua and Mahala were very fond of dancing. They went into Crockett to dancing school. At their Plantation, they had balls for the benefit of the Confederacy. They were active Methodists in the early Methodist church of Crockett. . . . by Esther M. Biggers nee Hall (great-granddaughter of Joshua & Mahala)


Mahala is enumerated as the head-of-household on the Hall Plantation at the time of the 1880 census. Other family members in the household are her widowed son, Sam, and his 6 surviving children, including my great-grandma, Berta Mary (1873-1955). It is said that Sam as well as his youngest daughter, Willie, died ca. 1885, which is the same year Mahala died.


The deceased family members listed in the last two paragraphs are buried in the Hall Cemetery in Houston County, Texas, which has been designated by the State of Texas as an official historical cemetery.

I have enjoyed your post, the card is amazing. Thanks for sharing.
debby