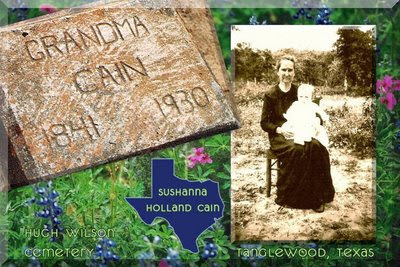 Rockdale Reporter. Thursday, July 10, 1930. Rural News. Cole Springs. Grandma Cain passed away last Monday evening. She had been helpless and bed-ridden since last October. She was ready and anxious to take her departure. She knew in whom she believed, and she was not afraid to die. "Precious in the sight of the Lord is the death of His saints." Mrs. Cain was a native of Alabama. She was 88 years old the 8th of last December. She leaves one daughter, Mrs. J.M. Pounder of Tanglewood, and a host of grandchildren and great grandchildren to mourn her departure.

Texas Death Certificate. "Deceased was not attended by a Physician during her last sickness. Cause of Death from statements was dysentary. Dislocated hip from which she was confined to sick bed until her death."


"I.C. Shaffer, M.D., . . . am of the opinion that her ailments were results of dislocated hip in October 1929, & the immediate cause of her death was dysintiry."

I still have quite a few questions about this Sushannah. The genealogy info passed on to me by numerous family members said that Sushannah was married to Isaac Cosby Cain and that they had two children -- Thomas Sylvester Cain (1862-1920) and my great-grandma, Mary Susan Pounders nee Cain (1873-1950).

When I started doing my own research, I found Sushannah on the following census records --

Susanna Cain's "Widow's Application for Confederate Pension" was dated 06 June 1930, less than two weeks before she died after being bedridden since October of 1929. In a cover letter (from the County Judge) which accompanied the application, W.F. Schlosshan observed that, ". . . she (Susannah) is very old ~ more than 88 years, and she was not able to furnish all the information in her application. . . ."

Susannah's pension application was approved . . . on a husband that supposedly died during the war (1861-1865) . . . but it appears that the only payment that may have been made would have been after her death . . . when one of her grandsons made an Application for Mortuary Warrant. . . .

This would make a great Madness Monday post as well. Some mystery there especially around Issac's death and the birth of their daughter....hmmmm. By the way I love your scrapbook pages. They look great.

This is definitely a conundrum. Do you think that our ancestors had any clue that we'd be going through their lives with a big shovel, trying to unearth all their secrets?[...probably not] Great post and analysis. Thanks for sharing!

I wonder what our ancesters would say, if they knew their lives were to become such a fascination to us.

I wonder what they would have left behind for us to find?

I think I'm going to leave behind some surprises for my forthcoming generations...

Hmmmm...well, you've inspired me once again!