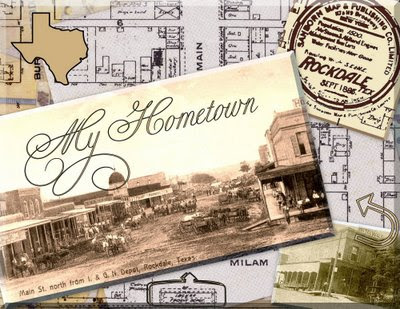 The postcard in the collage has been reproduced in multiple Rockdale publications . . . location / ownership / existence of original unknown . . .

According to a newspaper clipping from the files of my cousin, Peggy, a Henry family reunion was held at the old Hamilton homeplace in Rockdale, Milam County, Texas sometime in 1931. That yellowed and crumbling piece of paper recorded the following about the arrival of my 2nd great-grandpa, William Paschal Henry (1836-1912), and his family in the brand-new town of Rockdale, Milam County, Texas . . .


On Oct. 3, 1876, the Henrys arrived in Rockdale to visit a sister and family of Mrs. Henry's, it being Dr. and Mrs. M. F. Anthony, who at that time had the post office and drug store combined on the corner where the Wolf Hotel now stands.


That is the Hotel Wolf in the lower right corner of the above collage, with an arrow pointing to the same building on the old Rockdale postcard. The Hotel had gone out of business before 1935 when Rockdale's American Legion post purchased the building.


During World War II the building's second story was lopped off and its Main Street front was shortened and remodeled. A stage was added and the hall became the place to be for dances and music for almost 20 years. Rockdale Reporter, 06 Aug 1998


When I was in high school (the 60's), we frequently spent a portion of our weekend hours attending teen dances -- with real live bands! -- in the un-airconditioned bottom-half of this building. My parents were regular fixtures as chaperones at these events.


Directly across the street was McVoy's Grocery Store where my parents shopped weekly. Every Friday, my widowed Grandma, who never learned to drive, had her grocery list ready for Mom or Dad to take with them to McVoy's. There was a large wooden magazine rack near the front door where I would sit and read comic books while Mom checked out. Mr. Galbreath kept the produce stocked and freshly washed, and would give us pieces of fresh sugar cane to chew on. The meat market at McVoy's was where Mom bought steak cutlets for making her infamous chicken-fried steak with cream gravy which NONE of us have ever been able to replicate.


I was back on Main Street just this past weekend while in Rockdale for the 75th Annual Rockdale Homecoming as well as my Mom's 60th RHS Class Reunion, where I was flattered to be told by numerous people (who had known Mom since the 40s) that, "You look just like your Mom!"


At the Homecoming gathering, one lady said to me, "Aren't you the one who found the snake in the bedroom when you were babysitting Delaine?" That was also during high school in the 60s! I was babysitting for the local pharmacist in his home. The baby and I were sitting in the rocker / recliner in her nursery when I saw a snake come crawling in the room! I got out of the room with Delaine and shut the door (which wasn't much of a barrier since it had such a gap at the bottom) and called my trusty Dad at our home (no cell phones in those days). Dad was there immediately, but it took him a while to find and kill the poisonous copperhead -- it had crawled up into the coils under the rocker / recliner!


Before I left town, we (me & Mom & my sister) visited the Dan Kubiak exhibit at the I&GN Depot, and I also took a few photos of Joy Graham's Bit of History building on Cameron Avenue.


The journey back home to Main Street was nostalgic, while somehow filled with the sweet assurance that at Home we are not forgotten. These people knew me as a child. They knew my grandparents. And in some cases, their parents and grandparents knew my ancestors. And many of the families of Rockdale have somehow managed to climb into my family tree!

This 19th of June 2009 blogpost was prepared for Evelyn Yvonne Theriault's June edition of the Festival of Postcards . . . and was also submitted for Postcard Friendship Friday which was formerly hosted by Marie Reed.

I enjoyed reading about your hometown.

This is phenomenal! I'm smiling and reminiscing with you! I feel like I'm poking through McVoy's and hoping for a piece of that sugar cane! My Mom makes a mean chicken fried steak:) Whenever I visit from France (in 4 weeks....woot!)it's the FIRST thing she makes because it's my absolute favorite! I was thinking about you just yesterday. I fell upon a site called Heritage Scrap. Do you know it? They have amazing digital elements for scrapping your family tree! I'm always so impressed by your pages! Happy PFF my dear! This was such a nice walk down main street!

That seems like such a great main street! And I'm sure it holds lots of wonderful memories for lots of people! Thanks for sharing!

Great post, the card is fab! Thanks for all the great info.
debby

Thanks for the walk and tour down Main St.! You made me feel as if I was there with you, and, as always, your design was beautiful!

Marie, eat an extra bite or two of your Mom's chicken-fried steak for me! And thanks for the info on Heritage Scrap. I will definitely check it out. Always on the look-out for new inspiration.

Thank you all for joining me on Main Street in my hometown. Hope y'all enjoyed the visit!

We're having a Henry Family Reunion this coming weekend in Michigan. How funny that you'd mention that lol Aww shucks, I know, it's a different branch of the vast Henry tree.

Y'all have fun at your family reunion! My Henry branch was in Kentucky by the early 1800s, via Virginia. Our branch in Texas came about because gggrandpa Wm. P. Henry (1836-1912) left home at 17 and headed for Texas and apparently never looked back.

This is my second visit and I just noticed your little combined graphic of the postcard with the PFF and Festival logos - your are too creative!
Thanks you so much for contributing to the Festival of Postcards - and I look forward to seeing your next postcards.
Evelyn in Montreal

What a beautiful memory ~ really a lot of memories! You tell the story so well I can just see it all. Love it. Oh, and I noticed your combined graphic, too, and it's great.