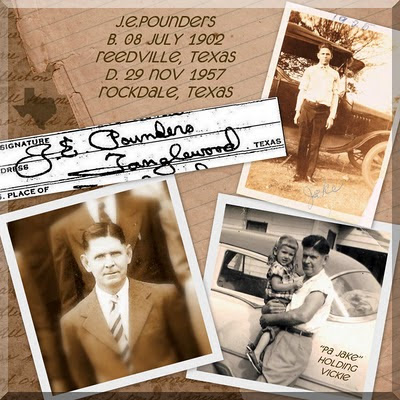 On this date in our family history . . . the 29th day of November . . . in the year 1957 (which was the Friday morning after Thanksgiving) . . . Jake Pounders suffers a heart attack while preparing to go to work at McVoy's Grocery store in Rockdale, Milam County, Texas . . . aka Pa Jake, this is my paternal grandpa . . . I was six years old at this time, and I can still picture my Dad standing in the kitchen at our home, crying, and saying that his Father was dead . . .

Jake Pounders, well known citizen of Rockdale, died Friday morning (29 November 1957) about eight o'clock after having a heart seizure at his home and being rushed by ambulance to St. Edwards hospital at Cameron. He was preparing to go to business for the day when the attack struck.


Jacob Edman Pounders was born July 8, 1902, at Reedville, Texas, in Caldwell county. His parents were James Madison and Mary Cain Pounders. His life had been lived in the counties of Lee and Milam, since a small child, and he was known to his many friends as Jake Pounders.


On October 20, 1926, Jacob Edman Pounders was married to Ima Muston and to them were born two sons and a daughter. Mr. Pounders was an active member of the First Christian church. He had been associated with a number of business places in past years and at the time of his passing was an employee of McVoy's Grocery, having been with the company for several years.

Posted by BeNotForgot at Sunday, November 29, 2009