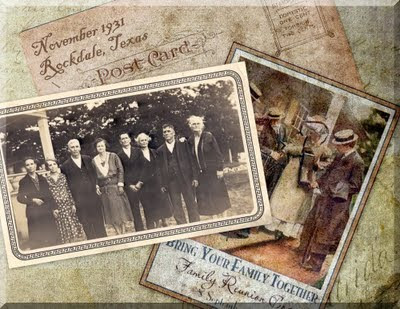 "I appeal to the American people to make November 26 next the outstanding Thanksgiving Day in the history of the United States; that we may say on that day that America has again demonstrated her ideals; ... that upon this Thanksgiving Day we have removed the fear of the forthcoming winter from the hearts of all who are suffering and in distress -- that we are our brother's keeper."


Some members of our family apparently took this message to heart, i.e. . . . the group photo in the above collage is from a November 1931 family reunion held in Rockdale, Milam County, Texas . . . these family members (from left to right) are --

The last named -- Edgar and Berta (Sharp) Henry -- are maternal great-grandparents to the Keeper of this family history blog . . . by 1931, they had been farming in west Texas for more than a decade . . . so it was probably quite a big deal for them to travel back to Milam County (their former as well as future home) during the desolate years of the depression . . .


Edgar and Berta's son, Robert E. Henry (1905-1976), is the maternal grandpa of the Keeper of this blog . . . in November of 1931, Robert was living in Massachusetts with his very pregnant 1st wife, Elizabeth, and their son, Robert, Jr. . . . so they are not listed as being amongst the attendees . . . a little over two months later, Elizabeth would die following the birth of their daughter (my Mom) . . .


I am extremely thankful that somebody in the family took the time to sit down and write out the details of this gathering, and to submit the article to the local paper (The Rockdale Reporter) . . . and I am grateful for whoever sat down and clipped this news story from the newspaper and carefully preserved it over the years until it finally passed into the caring hands of a cousin who shared it with me . . .

The following transcription of the yellowed and crumbling newspaper clipping of that article was e-mailed to me in 1999 by cousin Peggy . . . the bold text is the original wording . . . and the remaining text is notes that I have added for the purpose of clarification, etc. . . .

On Sunday, [sic] November 26 [sic], 1931, a happy event took place at the home of Mrs. Ella Hamilton in this city [Rockdale]. It was a get-together of the Henry family for the first time in twenty years. W. P. Henry and Mrs. Ella Hamilton being the only ones left in the old home town.

The 26th day of November in 1931 was Thanksgiving Day, and was on a Thursday . . . the photos from that gathering are actually dated Sunday, 22nd November 1931 . . . mayhaps the members of this family -- who had scattered over the years -- had an extended (and long-overdue) multi-day "reunion" at the Hamilton home that was once located at 604 West Cameron in Rockdale, Milam County, Texas . . .

Dr. and Mrs. T. E. Riddle were guests at this occasion, they being old friends and Dr. Riddle the family physician.

Thomas E. Riddle came to Texas from Tennessee as a young man and was engaged in farming and ranching while studying medicine. It was by long hard work that he prepared to take and successfully passed the medical examinations. Thus he proudly "hung out his shingle" and framed his certificate for his office. He was one of those rare individuals whose treatment included medicinal aids and prayer. Many of his medicines he prepared from plants, herbs and roots. These he carried with him in his saddle bag as he became a familiar figure moving mile after mile among the early day residents. Many long vigils were kept by this good man as he faithfully fulfilled the Hippocratic oath he had taken years before. Dr. Riddle served in the Confederate Army with McCord's Texas Cavalry, Company F, was a lifelong member of the Baptist Church, and was a Mason. It is probable that Dr. Riddle served Rockdale and its surrounding territory longer than any other doctor in the history of the town. His death occurred in 1934 and he is buried among many lifelong friends of yesteryears in the family cemetery. . . . from A History of Rockdale, Texas 1874-1974 edited by Mrs. Ida Jo Marshall (1903-1982).

Everyone came early, talked and enjoyed themselves. The dining room was decorated with lovely ferns and chrysanthemums. The table spread in picnic style, then came the time to eat, and everyone seemed ready. Dr. Riddle returned thanks.

In the afternoon some pictures were taken. Then came the parting time but all declared that they had enjoyed themselves.

See separate list > HERE < of all those not listed as attendees within this article. If the previous statement is correct, then there were quite a few at the reunion who didn't get listed in the 1931 newspaper article.

Grandpa Henry was born in Kentucky, came from there to Sherman in Grayson county. There he was married [sic] to Josephine Davis, she being a relative of Jefferson Davis [sic]. Grandmother was born in Georgia. Eight children were born to this union, three dying when infants.

According to an entry in Josephine's family Bible, "Josephine W. Davis married to Wm. P. Henry at the residence of Mr. James W. Lance March 1st 1864." We now know that marriage took place in Brazoria County, Texas, in which county Josephine was enumerated on the 1860 census. :: As of this date, I have still not found any connection to Jefferson Davis. :: Regarding the children born to this couple, according to entries in the family Bible --

On Oct. 3, 1876, the Henrys arrived in Rockdale to visit a sister and family of the Mrs. Henry's, it being Dr. and Mrs. M.F. Anthony, who at that time had the post office and drug store combined on the corner where the Wolf Hotel now stands.

This would be Margaret, Josephine's only sister. Margaret's husband (and also their 1st cousin once removed) was Dr. Milton Antony, Jr. He was a Confederate Surgeon in Brazoria County during the war between the states, and was the third Postmaster in Rockdale, serving 06th June 1876 to 26th April 1877 (which was one month after the entire wooden portion of Rockdale burned). He was a practicing physician in both Cameron and Rockdale. Margaret and Milton are buried in the Old City Cemetery in Rockdale.

The Wolf sat on the northeast corner of the intersection of Main and Milam. According to a history of Rockdale published in 1936, a two-story stone and brick bank building was erected in 1875, which later became the Wolf Hotel, and then, c. 1935, the American Legion Hall. An 1885 map of Rockdale does show a bank at that location, and on the corner across the street is a post office in the Mundine House (now McVoy's).

A year before Josephine went to Rockdale to visit her sister, Margaret, the following item appeared in the 12th November 1875 issue of the Galveston Weekly News: "There are street fights occurring (in Rockdale) almost every day and the officers of the law seem to enjoy it, taking their fines, never giving offenders the least word of warning or lecture. Nothing better could be expected when they license women of ill fame for ten dollars a month and receive half of the fines and their compensation. The most disgusting of it is, when they choose, these officers step beyond their authority and utterly disregard the law at pleasure. Every day or two some very interesting scenes occur in the pettifoggeries of Rockdale."

And a just a year before that 1875 report, the same paper, in the 09th November 1874 issue, described the brand new city of Rockdale as being "delightfully located in a thriving section of the county. . . . there are two or three banks, fifty or sixty merchants, and plenty of saloons, and has generally all the appearances of a railroad town. . . . While all it new and in some degree crude, there are some fine stone and brick buildings. . . . Where a population of eighteen hundred now thrive, was ten months ago the home of the deer, and the pleasure ground of the black bear." 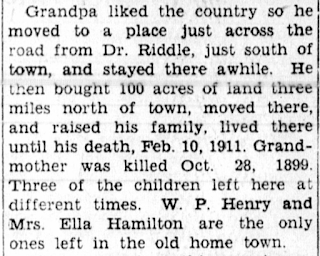 Grandpa liked the country so he moved to a place just across the road from Dr. Riddle, just south of town, and stayed there awhile. He then bought 100 acres of land three miles north of town, moved there, and raised his family, . . .

Milam County Record, Volume 54 Page 526-529 . . . Know all men by these presents that I, Mary Estes of the State and County aforesaid in consideration of the payment of a promissory note . . . for three hundred ($300) Dollars given by W. P. Henry, have granted, bargained sold and released and by these presents do grant, bargain, sell and release unto the said W. P. Henry all that tract or parcel of land known as a part of a two league survey . . . containing an area of one hundred acres of land. . . . Witness my hand this the 14 day of December 1878.

According to William Paschal Henry's printed obituary (actually a photocopy of an undated newspaper clipping), as well as his tombstone, he died in 1912, not 1911.

According to her tombstone, Josephine Wingfield Henry nee Davis died the 28th January 1899. Family lore said that she was drug to death by the hair of her head when it became entangled in the wheels of her buggy, but we were never able to find a newspaper account of her death in the existing newspapers for that time period. After receiving this conflicting information regarding Josephine's date of death, my Mom went to the Rockdale Public Library to once again peruse the microfilm copies of the 1899 Rockdale Reporter, and sure enough -- in the 01st November 1899 issue, she found write-ups supporting the family lore.

Three of the children left here at different times. W. P. Henry and Mrs. Ella Hamilton are the only ones left in the old home . . . (crumbled edge, but I would guess the word missing is town) 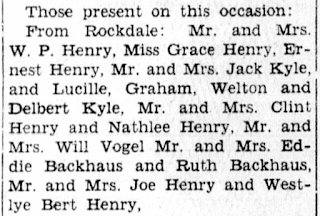 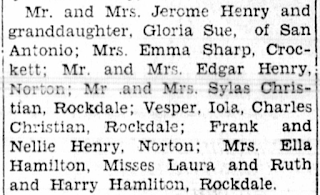 Those who were visitors:

This blog post was originally prepared for the 79th edition of a Carnival of Genealogy which was hosted by M. Diane Rogers at CanadaGenealogy, or, 'Jane's Your Aunt'. The theme for this CoG was Family Reunions. My article (originally published here on 31st August 2009) is actually a rewrite of a study paper I did ten years ago after receiving the transcript of the 1931 newspaper article from my cousin, Peggy.

Click > HERE < to read a reunion poem composed during the same time period that the above information was coming together -- about 10 years ago.

Posted by BeNotForgot at Sunday, November 22, 2009