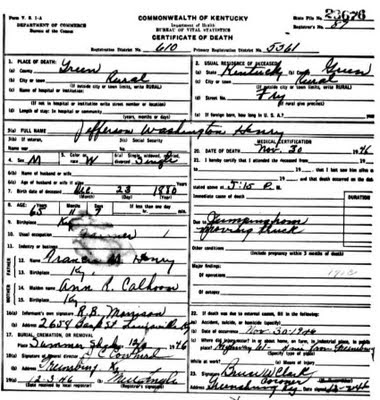 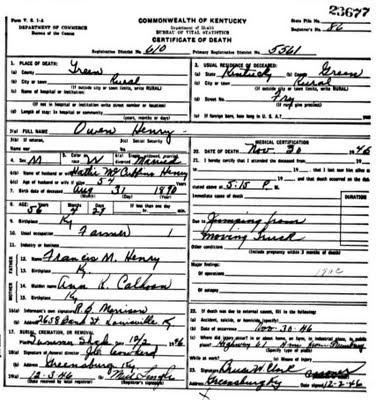 Two Killed in Leap from Car

Greensburg, Ky., Dec. 2. -- Green County Sheriff Boyce Hudson today reported two brothers, both Green county farmers, were killed Saturday night when they jumped from a moving pick-up truck driven by J.L. Buchanan, about 33, Greensburg. Hudson said the two were Jeff Henry, 65, and Owen Henry, 56, both of whom were riding along with 11-year-old Dwayne Zarnasdale [sic, i.e., Vanarsdale] in the back of the vehicle. He quoted the youth as saying the younger brother without warning suddenly leaped from the vehicle, followed by the other. A coroner's jury returned a verdict of death from unnatural causes. Both suffered factured skulls. The incident occurred on Highway 61 four miles south of here.

I'm sure that a newspaper account must exist. It seems like a very newsworthy story, especially if it was a small town, for two relatives to die in such an accident!