Her Birthday is Forget-Me-Not Day (for real!)


On an undated page in Berta Mary's autograph album are penned the following words :-

Dear Berta :-
Think of me when you are happy
Keep for me one little spot
In the depths of thine affection
Plant a sweet forget me not.
Your loving friend,
May. 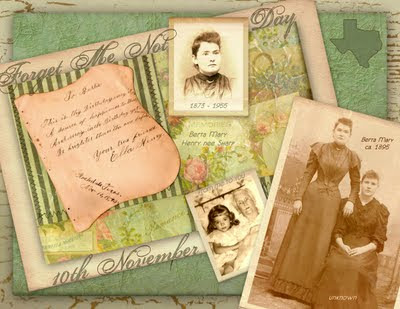 For more information on Forget Me Not Day, go > HERE < and then click on the link to Shades of the Departed to read the article entitled simply forget me not.

Well, happy birthday to Berta! (grin) What an interesting blog you have here!

What a beautiful way to celebrate your ancestor. Happy Birthday to Berta and may you get to greet her in the hereafter when the time is right. ~ Yaya