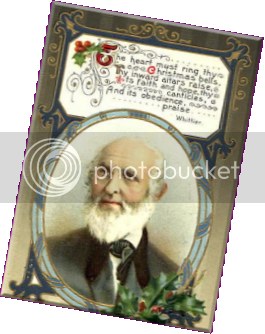 New York Times. December 18, 1888. Whittier's Birthday. Quietly Celebrated at his Farmhouse at Oak Knoll. Danvers, Mass., Dec. 17. -- At the quiet farmhouse at Oak Knoll, on the outskirts of the town of Danvers, there was a pleasant family circle to-day, and one of the most beloved of New-England's famous sons received congratulations on his eighty-first birthday.

Here, surrounded with the tender care of the Misses Johnson and Mrs. Woodman the poet, John G. Whittier is quietly passing the Winter. Today being the anniversary of his birth The Time's representative called to pay his respects.

The poet was found in his library, his erect figure and bright but kindly eye and the warm pressure of the hand gave but little token that more than fourscore years had passed over his head. A slight defect in hearing and snow-white hair and beard are the outward symbols of his ripe years. . . .


Low in the east, against a white, cold dawn,
The black-lined silhouette of the woods was drawn,
And on a wintry waste
Of frosted streams and hillsides bare and brown,
Through thin cloud-films a pallid ghost looked down,
The waning moon half-faced.
In that pale sky and sere, snow-waiting earth,
What sign was there of the immortal birth?
What herald of the One?
Lo! swift as thought the heavenly radiance came,
A rose-red splendor swept the sky like flame,
Up rolled the round, bright sun!

And all was changed. From a transfigured world
The moon's ghost fled, the smoke of home-hearths curled
Up to the still air unblown.
In Orient warmth and brightness, did that morn
O'er Nain and Nazereth, when the Christ was born,
Break fairer than our own?

The morning's promise noon and eve fulfilled
In warm, soft sky and landscape hazy-filled
And sunset fair as they;
A sweet reminder of His holiest time,
A summer-miracle in our winter clime,
God gave a perfect day.

The near was blended with the old and far,
And Bethlehem's hillside and the Magi's star
Seemed here, as there and then, --
Our homestead pine-tree was the Syrian palm,
Our heart's desire the angels' midnight psalm,
Peace, and good-will to men!


A little smile, a word of cheer,
A bit of love
from someone near,
A little gift from one held dear,
Best wishes for the coming year...
These make a Merry Christmas!

Posted by BeNotForgot at Thursday, December 17, 2009

Lovely tribute, Vickie. BTW, there's a DAR chapter in California named for John Greenleaf Whittier. You can read about it here.

I enjoyed your post on JGW very much. He is also my distant cousin and I posted a Christmas page about him on my blog -

Thanks for stopping by, Carla . . . funny timing, for I had already been browsing around on your family history blog this afternoon . . . as of this time, I only have "cousin John" in our tree by marriage . . . I need to go look at your blog to see just how you connect . . . V. . . .