An Ode to My Family History


The following poem was composed as an introduction to an imaginary book about the entire community of kith 'n kin that is buried in a certain little country cemetery in Central Texas ... many are connected to a particular group who were known as "Us Mississippians" during the latter part of the 19th century ... written as if talking to the descendants of my nieces & nephews, et al ...

May I share with you a little story
of a quiet resting place
tis a small country graveyard
home to those who have finished life's race.

Tis a lovely place in the springtime
bluebonnets & wild phlox abound
here & there a pink evening primrose
a lovely pallet amidst nature's sounds.

Allow me to introduce a few folks
who begat the who who begat you
for one of these days there will be a time
when I won't be here to walk with you.

Let's start here at the grave of my Father
a gentle humble man was he
he loved making little kids giggle
always enjoying the sound of their glee.

And over here, these are his parents
they were married for 31 years
Pa Jake died early, but Granny lived on
she outlived their two sons & her peers.

Jake's parents are next in this row of graves
of loved ones of which you're a mix
they left Belgreen, Alabama for Texas
in the year eighteen hundred and ninety-six.

And over yonder is Pa Jake's Grandma
she's buried a few rows away
the homemade marker just says Grandma Cain
with no mention of a birth or death day.

Now let's stroll a little bit farther
past the graves of our kith 'n kin
to the other end of the graveyard
where older markers are known to stand.

(Did you happen to bring your camera
you know there's always an image to save
like that tree standing there in the corner
like a guardian over each silent grave. 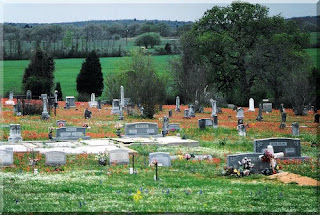 I have captured it during each season
in winter, spring, summer & fall
there just seems to be something about that old tree
that has spent years watching over us all.)


Now that grave belongs to my Dad's Grandma
the mother of seven was she
not a son did she have, all girls in the house
and a widow when the baby was wee.

Near to her are her own loving parents
the father who served with John Hood
& the young bride from Mississippi
who beside many a grave has stood.

These graves hold the dust of your history
for many years they have been gone
they lived & they died before you were born
these generations have all traveled on.

And when I have slipped the bonds of this earth
with this family is where I will be
& this ground is where my dust will rest
only rememberings will be left of me.

So when you come here to reminisce
& these old acquaintances to renew
may the memories never dim, let them be not forgot
'cause they begat the who who begat you.

~ The ancestors spoken of here ~


... plus a large number of assorted kith 'n kin,
many being the very people who were mentioned
in the family stories told by these ancestors ... 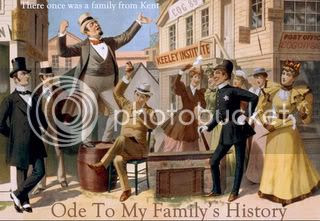 This poem was composed for -- and has been submitted for consideration to -- the 89th edition of Jasia's Carnival of Genealogy.


Special thanks to footnoteMaven for the delightful COG poster.

WOW, Vicki!!! You are so talented in so many beautiful things. Your poem brought to mind all my family that rests in the same cemetery together.
Awesome job!! Thank you for sharing your talent with all of us. - Terri

Vickie, great imagery, great rhythm, and you gathered me right in beside you as we trod that soil. Thanks

Bill, Terri, Janet, Joan & Jasia -- thank y'all so much for stopping by and taking the time to comment. It took me D-A-Y-S to get something going for this particular CoG, but then when it started, this poem just took on a life of its own. Mayhaps the ancestors had something they wanted said ... V.

Wonderful poetry. Strangely enough I find walking in graveyards both fascinating and peaceful. Thank you so much for sharing this.

Beautiful poem Vicki, as Terri said, you are talented in so many beautiful things ~ thank you for sharing that talent and beauty with the rest of us, you truly inspire.

Your post touched my heart in so many ways. My cemetery is just like yours, tree standing guard over the graves, and four generations rest there now. Some of them were too young when they left us, too.

I love your poem, and you've inspired me to try to write something as similar as possible for my kith and kin.

How have I never read this, I love it!!!