She was lying across the axle dead, with her hair and clothing wound around the spindle of the buggy. . . .


It was the autumn of 1999, and I was on the phone with my Mom, listening to her read these words from her handwritten notes . . . 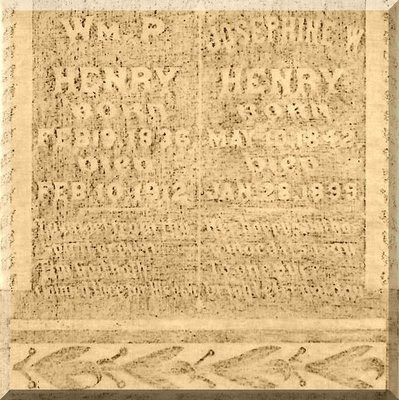 As you can see in the tombstone rubbing shown here, it is "carved in stone" on this grave marker that Josephine W. Henry died on the 28th day of the month of January in the year 1899 . . . this Josephine is a 2nd great-grandma to the Keeper of this family history blog . . . and this date of death is the one that has been recorded in every family history record I have seen for generations in our family . . .

I grew up hearing stories of how "our Josephine" died by being dragged to death by the hair of her head . . . I always figured if there was even a kernel of truth in that story, then there should at least be a mention of it in the local newspaper . . . the little town in Central Texas where I grew up . . . and near where Josephine and her family lived in the last quarter of the 19th century . . . actually has copies of the area's 1899 newspapers available on microfilm at the local library . . . but no matter how many times I looked at that microfilm, I could find no mention whatsoever of Josephine's death in January or February of 1899. . . .

Shortly before her 1899 death, Josephine and William and all of their living descendants posed for a family photo . . . based on the babies appearing in this photo (born in March and September of 1898) . . . as well as the babies who are not present in the photo (born in May and July of 1899 . . . it is currently assumed that the image of this family gathering was captured sometime during the winter of 1898-1899 . . . March of 1899 would have marked their 35th wedding anniversary . . . mayhaps the gathering was to mark that occasion? . . .

It was decided that the centennial anniversary of the family gathering documented in that late 19th century family photo was the perfect time for a gathering of descendants of Josephine and Wm. P. Henry . . . there had been a few reunions during the preceding century, but none in quite a while . . . a mailing list was put together . . . invitations went out . . . multiple displays were assembled to showcase the family history of the descendants of Josephine and Wm. P. Henry . . . and on a stormy Saturday in the fall of the year 1998, approximately seventy-five of our kith 'n kin gathered at the Minerva Community Center in Milam County, Texas (very near where the ca. 1899 photo was taken) . . . the reunion was a surprising success, so another year later, as I was preparing for the final such gathering of the 20th century . . .

In September of 1999 I received an email from a Henry cousin (Peggy) who had found a yellowed and crumbling newspaper clipping in some papers she inherited . . . about a 1931 Henry Reunion . . . and in that clipping was the following eye-opening statement . . .


Rockdale, Milam Co., Tex., 29 Oct – A very sad accident occurred about three miles north of Rockdale late yesterday [Saturday] afternoon in which Mrs. W.P. Henry, a lady about 60 years old lost her life. While driving home from her son’s her horse became frightened, ran away and smashed the buggy into kindling wood and when found Mrs. Henry was dead. It is supposed she was killed instantly. She leaves a husband, a large family of children and many friends to mourn her untimely death.


Last Saturday news reached Rockdale that Mrs. W.P. Henry had been killed by her horse running away with her.

When she was found between her home and that of George Banzoff, near the gate that leads to Dr. Isaac’s home, she was lying across the axle dead, with her hair and clothing wound around the spindle of the buggy.

One of the wheels was broken, and the rim of this broken wheel was found near the Murray school house, from which place she was dragged to where she was found.

The road indicated that the horse had been frightened and ran away. The wheel showed that the rim of the wheel had received a wrench and broke it loose from the spokes.


Her funeral took place Sunday at Murray school house, and a large procession of friends and relatives witnessed the ceremonies that consigned her body to its last repose.


She was the wife of W.P. Henry, one of our most substantial and upright farmers and the mother of five children, all grown [plus three who died young].
The Reporter extends sympathy to the bereaved family.


Since the account of the tragic death of Mrs. W.P. Henry, on another page of this paper, was printed, we learned the following details in regard to her death.
As she was nearing the house of Geo. Banzhoff, her buggy ran into a wagon in which were two young men*, Messrs. Bradley and Jenkins.


This collision broke the rim off the wheel referred to in the other account, and evidently she was thrown out of the buggy at that time, as when found her head was caught between the wheel and the shaft, on the side opposite the broken wheel.


The road over which she went showed where her limbs had been dragged from the point where the collision occurred to the place where she was found.
The men state that she was in the buggy as far as they could see, but in this they were mistaken.


The buggy top was raised and it was impossible for them to see a person in the vehicle, and as they saw no one on the ground, they naturally supposed that she had not fallen out.


It is indeed unfortunate that these men did not follow her and rescue the body, when they found out the wheel had been broken.


While they doubtless thought she was unhurt, they should have gone to her and rendered what assistance seemed necessary.


Her neck was doubtless broken by the fall, and while they could not have saved her, they could have carried the body home when the accident happened.


Accident - Mrs. W. P. Henry who has lived on the Cameron road, 3-miles from Rockdale for over 20-years left her son’s home on the Dr. A. C. Isaacs farm, about 3-miles beyond her home, to come home and as was her habit, she pushed her buggy animal, a gray mare that she has driven for several years, into a lope.


The woman had probably never seen the wagon or saw it too late to stop, and she was pitched foremost and fell with her head between the left fore wheel of the buggy and shafts and was so held that her hair was wound around the buggy hub and spindle and she was held there until some young man, met the buggy at the gate near the old Ferguson place, more than a half-mile this side of where the accident occurred.


She was dead when found as her neck was broken. She was buried at the Pleasant Grove cemetery Sunday evening. She leaves a husband and five grown children, three sons and two daughters, all married. Brother Henry does not blame the drivers of the wagon for the accident but thinks they should have ascertained the results before driving home. 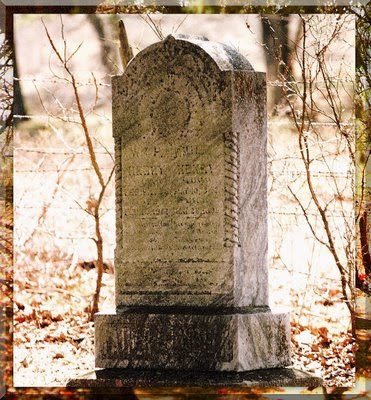 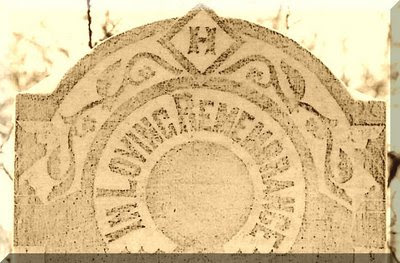 On this date in our family history . . .


Josephine Wingfield Henry nee Davis
is dragged to her death . . .

And remember . . .
just because it is carved in stone


does NOT mean it's true!

Good post --- you make an excellent point that all family researchers should take note of and always attempt to validate grave marker data.

What a sad story. I've seen errors on my ancestors gravestones as well. My great grandmother's name was misspelled when they carved the stone for my ggf's burial... and she was still alive!

The headline and subject of this surely caught my eye. What a great piece of sleuthing and story-telling. Bravo, and thanks so much for sharing with us.

What a great story, and what a great lesson to share, too! And the photographs were great!