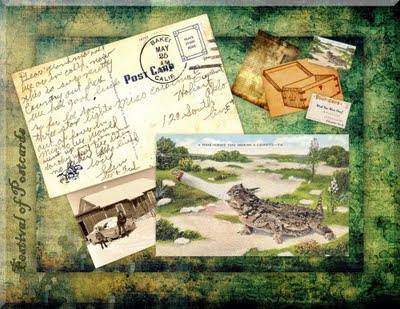 It was a snowy winter's day in February of 1975, and this family history blogger and her husband of less than a month were traipsing around the Oklahoma land that had been in his family since the turn of the century. As we entered the deserted farm house that had once been occupied by his grandparents, we could make out what turned out to be an old decaying trunk sitting in a cob-webbed corner of the dusty room. Although the trunk appeared to be full of ordinary trash, this geneaholic could not resist sifting through each individual piece of paper to see what treasures might be hiding there. And I did indeed find a few, including the postcard featured in this collage.

The "Texas horned toad" is actually a lizard, and since 1993 it bears the distinction of being the official Texas State Reptile. The horned lizard is even featured on a special Texas license plate from which the proceeds go to the Texas Parks and Wildlife Department to benefit the conservation of wildlife diversity and to protect native, non-game species such as the Horned Lizard. When my sisters and I were young (1950s) one of the delights of a lazy summer day -- besides eating ice-cold watermelon, or even colder homemade vanilla ice-cream -- was to line our little red wagon with sand from the garden spot. This became a little village on wheels for the baby horned toads we would find during the day -- complete with horned toad beds made from little matchboxes. This postcard of "A Texas horned toad smoking a cigarette" is postmarked 1942 and mailed in California, and it is addressed to "grandma" aka "Miss Caroline Everhart" in Hobart, Oklahoma. The names signed on the back of the card are believed to include her son, Fred Everhart (1892-1972) and his son, Gene (b. 1925), and another of her grandsons, Lee Womack (b. 1914). In 1942, "Miss Caroline" is actually an 81-year-old widow whose maiden name is Caroline Hildenbrand. This Caroline is the paternal great-grandma of the husband of the Keeper of this geneablog. Caroline was born 20 January 1861 in Tecumseh, Kansas, the 1st-born daughter of German immigrants, Jacob J. Hildenbrand (1825-1904) and Johanna Dorothy Kohler (1832-1911). Caroline married Jacob Eberhard in 1880, and survived him by 30+ years, dying in January of 1954. One of her ten children was Jacob Peter Everhart (1887-1975), who once occupied the farmhouse pictured in the collage.

The above postcard collage -- with a quadruped theme -- was posted for the 20th October 2009 edition of A Festival of Postcards (5th edition) which is hosted by Evelyn Yvonne Theriault who lives near Montreal, Quebec, Canada.

Again, a wonderful piece of art, V. I enjoyed reading about Caroline's family and your foray into the old homeplace in Oklahoma. What wonderful memories.

Beautiful presentation. And now I know a little bit more about Texas.

The postcard is such a great find and I love the collage. Great work.r