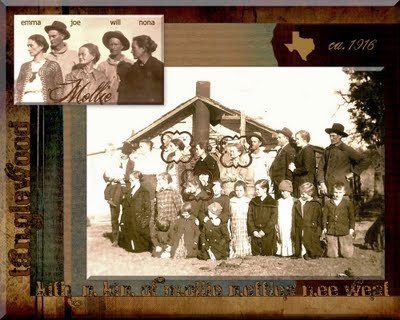 Her birthplace was a one-room log house with one window and one door, and a stick and mud chimney. We were quite poor, I guess, said Grandma, but I never remember being hungry.


Here they lived until the Civil War broke out in 1861. Because the men folk were soon away from their homes fighting or training, the women and children often gathered in the homes of relatives who had houses large enough to accommodate them.

Sarah Mildred's sister, Mary, who had married Wm. VALENTINE, lived in a home of six rooms, a long wide hall, two large porches and a portico in front of Mary's room. The VALENTINE children were Dave, John, Lou and Margaret, and their WEST cousins were Mary Ann (Mollie), Billy and Dave. So for the four long years of war the VALENTINE residence was often home to the WESTS.

The above quote is from a narrative about Mollie's Memories which was compiled by one of Mollie's granddaughters -- Ruby Lee Vance nee Nettles (1910-2003) . . . Miss Ruby is a daughter of the Joe named in the photo in the upper left corner, and is a 1st cousin to my paternal grandma, Ima (mentioned above) . . . the group photo used in the collage has the following names handwritten on the back of it . . . from the left . . .

The following notes were jotted down while attempting to acquire information from Ima about the folks in the group photo . . .

Log house ... two big rooms ... kitchen ... shed built on side ... fireplace built out of big rocks ... stuffed newspapers between logs ... Polly & Jim Hooper ... no kids ... friends in Wharton of Emma & Charlie ... moved back to Tanglewood with Emma & girls after Charlie's death ... lived near ... helped out where they could ... buried in Tanglewood ... gave Ima lilac pickle dish upon marriage to Jake ... Ima used to clean for Grandma Nettles ... swept yard ... cleaned ... baked cookies ... got 25 cents ... spent at variety store in Rockdale ... Donna (Emma Muston) did sewing ... Ima did field work ... hauled water ... milked cows before school ... moved cows to pasture ... walked thru pastures mile or so to one-room schoolhouse ... had merry-go-round ... teacher boarded at Aunt Nona's and Uncle Frank's ... Miss Norene drove from Tanglewood to teach ... school Christmas programs ... Christmas at home ... made paper decorations ... cut wrapping paper in strips and twisted ... had Victrola ... dance on Christmas Day ... chickens laid eggs on bed between pillows ... Uncle Will had cows ... cream separator ... sold cream ... took T-Model to Rockdale ... Uncle Will used house for barn after built new house ... vegie garden by barn ... no flowers ... after marriage to Jake, Ima made syrup from sugar cain ... strip ... cook ... make juice to make syrup ... shared with neighborhood ... Donna gave cow and calf to Ima upon marriage to Jake ... made butter ...


For further reading about our Mollie . . .