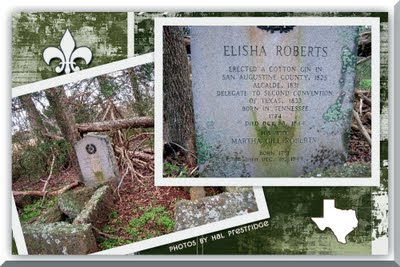 In celebration of the Texas Centennial in 1936, granite Centennial markers were placed at historical sites around the state, including the grave and the homesite of our Elisha. According to The Handbook of Texas Online . . .

ROBERTS, ELISHA (1774-1844). Elisha Roberts, pioneer and public official, was born in 1774 at Watauga Settlement, near the Holston River in Hawkins County, Tennessee, the son of George and Rhoda (Payne, Paine) Roberts. He was married by 1800 in Kentucky to Martha Gill; they had nine children, including Esther Jane, who married Philip A. Sublett. The family moved in 1811 from Green County, Kentucky, to the northern part of St. Tammany Parish, Louisiana (later Washington Parish). During the War of 1812 Roberts served as lieutenant and quartermaster under Gen. Isaac Roberts' Brigade of West Tennessee Militia and lieutenant in Captain Bickham's company, Louisiana militia.


In 1822 Roberts entered East Texas in pursuit of a runaway slave whose wife had been carried to Texas by another master. Roberts was attracted by the redland countryside east of Ayish Bayou. He returned to the site in 1823, when his slave ran away again, and found the land occupied by a Spaniard, to whom he traded a slave for the land and improvements. In January 1824 he settled his family near the site of present San Augustine. Shortly after, his brothers [sic], Redden and William Roberts, moved into the area. In 1825 Roberts's thirty slaves dug out the branch springs on Tiger Creek, a tributary of Palo Gaucho Bayou that became known as the Old Brick Spring, and built a cotton gin, at that time one of four in the district; the others belonged to John Cartwright, John Sprowl, and John A. Williams.

Roberts was elected alcalde of the Ayish Bayou district in 1831. He held court on the broad front gallery of his house; Sam Houston, James Bowie, David Crockett, William B. Travis, and Stephen F. Austin all boarded there. In 1833 Roberts was elected delegate to the convention in San Felipe. He was one on a committee of fifteen to select the townsite of San Augustine, which was built in 1834. He received a Mexican land grant on November 7, 1835. In 1835-36 he furnished provisions, lodging, and transportation for the revolutionary cause. In 1837 he became a member of the board of trustees of San Augustine University.


The following, adapted from the Chicago Manual of Style, 15th edition, is the preferred citation for this article.