1) Pick one of your four great-grandparents - if possible, the one with the most descendants.
2) Create a descendants list for those great-grandparents either by hand or in your software program.
3) Tell us how many descendants, living or dead, are in each generation from those great-grandparents.
4) How many are still living? Of those, how many have you met and exchanged family information with? Are there any that you should make contact with ASAP? Please don't use last names of living people for this - respect their privacy.
5) Write about it in your own blog post, in comments to this post, or in comments or a Note on Facebook. 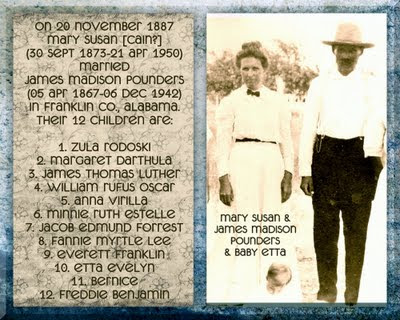 My most prolific great-grandparents (by far) are my father's paternal grandparents, James Madison Pounders (1867-1942) and his wife, Mary Susan [Cain?] (1873-1950). Their 12 children (all now deceased) were given some of the more unique names in my family tree.


From these twelve children, Mr. & Mrs. J. M. Pounders had the following ::

That equals 248 known descendants -- and I know there are more, but I do not have that info at this time -- need to work on gathering and collecting those names and dates!
James Madison Pounders died in Rockdale, Milam County, Texas in 1942, and that is where I grew up. A large percentage of his descendants are still there and / or return there often to visit family, so I grew up knowing many of these people. Some did move to other states or other parts of Texas, so there are a few I never met, but even some of those have been in touch via mail and/or email. 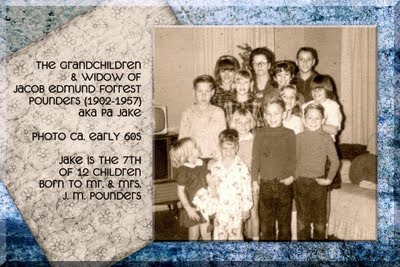 I descend from the 7th of the 12 children born to Jim and Mary Susan -- that son was my "Pa Jake." This photo shows all of the grandchildren of Pa Jake. I am his 1st born grandchild, and am standing on the left on the back row in this photo.

Posted by BeNotForgot at Saturday, October 17, 2009

Holy Cow! Great job, and what a huge family. Mine is so much smaller.

Wow, another big family. I got tired and quit count after the great-great grands. Made me realize I need to finish working on my great Uncle's line.

248+?!? I couldn't believe it myself! I kept going back and checking my math to make sure. I even printed out the outline descendant report from Family Tree Maker -- NO spouses included -- so I could hand-count all of these people. There really are that many that are the known children and grandchildren, et al of Mr. & Mrs. J. M. Pounders!