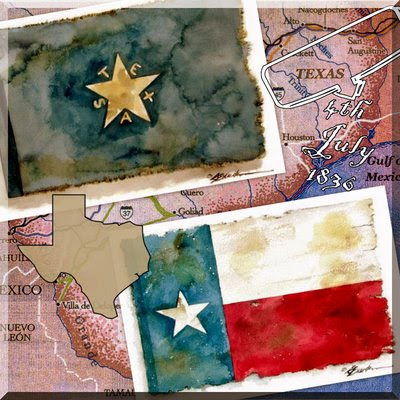 My 4th great-grandpa, Elisha Roberts, and many members of his family are living in San Augustine County, Texas . . . so it is likely that they are attending a gathering being held in honor of an old family friend . . . recent events in Texas in 1836 include the Battle of the Alamo and the Battle of San Jacinto, where General Sam Houston is wounded in the ankle . . . thankful we are that John Salmon Ford decided to record the following about this event . . .


San Augustine, a town in the county of the same name, stands in the "Redlands" -- so called from the color of the soil. Around San Augustine many former residents of the state of Tennessee had settled. They were men of respectability and influence, and had taken an active part in the war against Mexico. . . .

General Sam Houston stopped on the "Redlands." His home had been at San Augustine. Houston was on his way from New Orleans whither he had gone to have the wound received at San Jacinto treated. His wound was on the ankle. It was still unhealed. . . .


Houston was then a splendid specimen of manhood. A form and features which would have adorned the walks of royalty, a fund of conversational powers almost unequalled, the matchless gift of oratory, a vast grasp of intellect -- all marked him a great man.


General Houston accepted the hospitality of ELISHA ROBERTS and of his son-in-law, Colonel Philip Sublett. The latter commanded the Texians at the "Grass Fight," which came off near San Antonio in 1835 and was one of the hardest contested affairs of the war.


It was arranged to have General Houston meet his friends at San Augustine on the FOURTH OF JULY, 1836. It was a joyous reunion. The fearless pioneers, who had left home and kindred and all their attendant attractions to aid in reclaiming a vast and fertile empire from the predominance of Indians, came together to salute their friend, the successful leader of a revolution, with the laurels of San Jacinto fresh upon his brow. Honest and stout hands were clasped, and true hearts thrilled in response to the promptings of sincere friendship. It was a scene one could never forget. . . .


In this assembly which greeted General Houston were men of note. Colonel James Bullock who commanded the Texians in 1832, when they expelled the Mexican troops under Colonel [Jose de las] Piedras from Nacogdoches, and Colonel Alexander Horton, one of General Houston's aides at San Jacinto, were there.


One splendid old soldier must not be omitted: Donald McDonald was captain of a company, on the British side, at the battle of Lundy's Lane [during the War of 1812]. He went into the fight with eighty odd men and came out with fifteen. Colonel S.W. Blount, a signer of the Texas Declaration of Independence, was also present, if memory is not at fault.


These gentlemen of eastern Texas are mentioned to show the kind of men constituting the class since called "Old Texians." A more candid, friendly, and hospitable population never occupied any country. A stranger was not allowed to pass a house without being invited to stop. No difference how long a guest remained, provided he minded his own business, he was entertained free of cost. If he asked for his bill, he was told a repetition of the inquiry would be taken as an insult. The coffee pot was on the fire at nearly every house in the country from daylight till bedtime. A visitor was invited to take a cup -- a refusal was not taken in good part.


Energy, bravery, a practical view of all matters, self-reliance, moderation, and a disposition to act in concert with their fellow citizens were the characteristics of the early settlers. Danger menaced them unceasingly, rendered them cautious, and molded them into soldiers. Having to take care of themselves gave them an idea of what their far-off neighbors needed to make them comfortable and to protect them. Thus they acquired correct ideas of what was necessary to preserve order and give adequate protection to person and property. Many of those commonsense men rose to the full height of soldiers, legislators, and statesmen. . . .