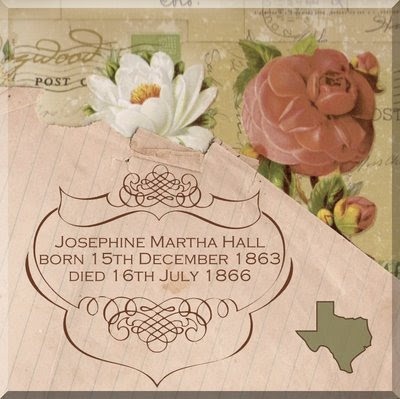 Were it not for the words her father penned in his Civil War-era Journal, very little (if anything) would be known about the short life of Josephine Martha Hall, who died on this date . . . the 16th day of July . . . in the year 1866 . . . at the age of two years seven months and one day . . .


Little Josephine's Mommy is the sister of my 2nd great-grandpa, Samuel Houston Sharp (ca. 1839-1885), and Josephine's Daddy -- James Madison Hall -- is the stepson of my 3rd-great-grandma, Mahala Lee Sharp Hall nee Roberts (1816-1885). Beginning in January of 1860, J.M. Hall kept a daily journal -- until his own death less than two months following the death of his Josephine. Following are a few excerpts from that journal that pertain to Josephine.

Wow! Powerful...and so sad. Thanks so much for sharing this with us. An unusual insight into life in the 1860's.

Thank you for sharing this sad, but poignant post about your ancestors' lives during a very difficult time. You are so very fortunate to have this diary that provides such insight into life in Texas during the mid-1800s.

Thank you for sharing. It is easy to forget what fortunate times we live in with much advances in medical treatments in the last generation.

You have so many lovely things going on in your blog space.

Thank y'all so much for dropping by to get to know our little Josephine -- I'm glad you enjoyed her brief life story!

My introduction to this journal of her father's began with me planning a family reunion in 1998 . . . and then actually going to visit a distant (previously unknown) cousin.

You gotta follow through with those leads -- you never know where they will take you!

That was an amazing powerful blog. How hard their lives were! It is a wonderful thing to have discovered such a treasure as this journal. Goodness. It must have been so hard back then--yet life had many small pleasures within the hardships...

Great post, thank you for sharing. You are very fortunate to have your ancestor's diary and to have this glimpse into their day to day lives. I particularly enjoyed how he called his wife the "little woman."