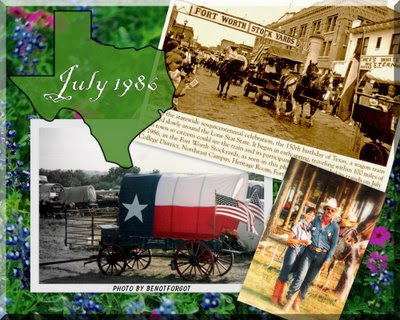 On this date in my fairly recent family history . . . the 4th of July . . . in the year 1986 . . . my husband and I were spending the day at the Fort Worth Stockyards after riding horseback off and on for six months . . . including the entire month of June . . . on the trail with the Texas Sesquicentennial Wagon Train . . . that's me with my dear Hubbie in the lower right photo of the collage . . . I snapped the photo of the Texas flag wagon at one of our campsites . . . the image in the upper right of this collage is from Fort Worth Stockyards by J'Nell L. Pate (2009). The caption reads as follows . . .

During the statewide sesquicentennial celebration, the 150th birthday of Texas, a wagon train traveled slowly around the Lone Star State. It began in early spring, traveling within 100 miles of each town so citizens could see the train and its participants. The train ended its travels on July 4, 1986, in the Fort Worth Stockyards, as seen in this photograph. (Courtesy Tarrant County College District, Northeast Campus, Heritage Room, Fort Worth, Texas.)

was just looking up to see what info was online from that day....I went with my almost 3 year old daughter to watch it roll into Ft worth.Thought I would be part of some Texas History.