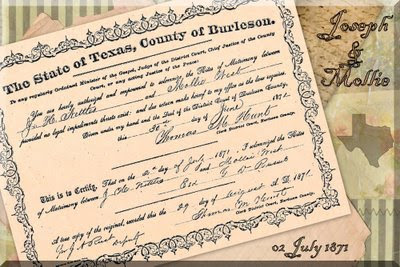 FYI . . . the names in bold print are my direct ancestors.


Shortly after her arrival in Texas (from Mississippi) in 1869, a young orphan by the name of Mollie West became acquainted with Joseph Nettles, a Civil War veteran twenty years her senior. On 02 July 1871 in Burleson County, Miss Mollie became Mrs. Joseph H. Nettles.

Miss Ruby* recalled her little Grandmother telling her that Joseph Helidorah Nettles was born 23 March 1832 in Alabama. He had several brothers and sisters who died in a yellow fever epidemic during the Civil War. A surviving sister married a Muldrew and lived near Houston, Texas.


By 1861 Joseph was in Texas, where he enlisted for the duration of the Civil War in the Grimes Co. Greys, aka Co. G of the 4th Texas Infantry. The Fourth Texas was one of three Texas Regiments to serve in the famous Hood's Texas Brigade of the Army of Northern Virginia. The Texas Brigade was often said to be the best under the Confederate flag.


Having miraculously survived the battle of Antietam (September 1862), which is considered by many to be "the bloodiest single day of the war," Joseph was then wounded on the second day of fighting at Gettysburg (02 July 1863), and again in the battle of the Wilderness (May 1864).

In a letter dated 15 Sept 1871, Della Vick wrote, "I went to the barbecue in Lexington last Saturday was two weeks ago. There was a good many people there but we came home and went to Prospect to preaching that night. It is four miles. There was five joined that night and among them was Mollie Nettles used to be Mollie West."

The newlyweds lived for a time in the Rockdale area with Mollie's relatives, Mr. and Mrs. Billy Perry, and later with Mrs. Courtney Valentine Nalley. Soon they moved to Lexington where Joseph had a woodworking shop in connection with the Hester blacksmith shop. Here their first child, Nona M. (1872-1949), was born. Miss Ruby wrote that . . .


Their home was on Doak Lane, the old Giddings road south of now old-town Lexington, and just across the lane lived Dr. Doak and family. In 1929 this writer had to have emergency surgery for an almost ruptured appendix, and the surgery was done in Taylor, Texas by Dr. Edmund Doak. Later, when my grandmother was told who my surgeon was, she laughed and told me this story.

When my grandmother's Nona was a baby, Mrs. Doak had a baby boy named Edmund. One day Dr. Doak was called out on a case in which he needed the help of his wife. She hurriedly nursed her infant then took him across the lane to my grandmother to tend until they returned. The case took longer than had been anticipated, and baby Edmund began to have hunger pangs. Finally, Grandma could stand his crying no longer and sat down and nursed him as though he were her own. 'I had plenty for both babies,' she laughed.

A deed for 100 acres of land in the Daniel Walker League, bought from J. C. Coker, was filed by J. H. Nettles in Giddings on 12 Oct 1882. Later adjoining land was bought and here the family grew up. This was in the Cole Springs community west of Tanglewood.


"J. H. Nettles was not a well man due to hardships and exposure during the Civil War, and 01 May 1890, he succumbed to his illness. He was 58 years of age" and was buried in the Hugh Wilson Cemetery near Tanglewood.


Gene, Grandma's half-brother, had not married so he came to live with the family and help make a crop. To baby Joe he was more like a father than an uncle. He often took the child with him as he rode horseback over the community or to Tanglewood for supplies. The girls began leaving home as they married and established homes of their own. Gene also married, but Will remained at home with his mother.


Miss Ruby stated that, "It was on this place (in Cole Springs) in a house, the main room of which was of huge hewn logs, that this writer was born in 1910."

Another of Mollie's granddaughters, Ima (Muston) Pounders, recalled that their Grandma would save old newspapers, catalogs, etc., and would then use the papers to fill the gaps between the logs in the cabin walls.

Several granddaughters fondly recalled Mollie's special cookies that were baked in Mollie's old wood burning stove. Mollie had an old tin container which served as her "cookie jar" and was replenished regularly.


Regarding the community switchboard which was operated by Mollie at one time, Miss Ruby said that . . .


I remember exactly on the log wall where that switchboard hung. I also remember the menfolk getting together sometimes to fix the lines when a windstorm or something caused a break in them. . . .

And it was here that my grandmother became ill in 1938 and finally went to Lott, Texas, to live with her youngest child, Joe, and his wife, Carrie. She passed away 01 May 1939, having lived a widow exactly forty-nine years. She was buried beside her husband in the Hugh Wilson Cemetery near Tanglewood.


According to Mollie's obituary, she was known as ". . . one of earth's dearest and sweetest little mothers" and that "from the wisdom of her years she gave counsel, advice and help to all who sought it, and truly will she be greatly missed by all who knew and loved her." Miss Ruby said that . . .


My Grandmother never knew what it was to have an "easy" life, but she knew how to make the best of what she had. She told this writer one time, "You take the good and the bad as they come. But if you look at things the right way, the good always comes out ahead."

*The original version of this family story was compiled by Ruby Lee (Nettles) Vance (1910-2003), and was published in the 19th April 1979 edition of The Giddings Times & News in Giddings, Lee County, Texas. The occasion was the 14th annual Lexington Homecoming. . . .

This has been a fascinating read. Thank you for sharing the story with us. HAPPY 4TH OF JULY