It's Saturday Night, time for some Genealogy Fun (with Randy Seaver) after your frustrating week of finding phantom ancestors in online family trees and trying to keep up with everybody on Twitter, Facebook and Genealogy Wise. Here is your assignment for this Saturday Night (if you decide to accept it, of course - you can't have fun if you don't try): (1) Let's go time travelling: Decide what year and what place you would love to visit as a time traveller. Who would you like to see in their environment? If you could ask them one question, what would it be? (2) Tell us about it. Write a blog post, or make a comment to this post, or on Facebook, or in Genealogy Wise. 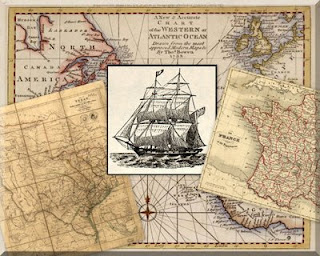 
Upon the death of LEMAIRE, the French consul of the town of Liberty, Cramayel chose not to replace him, declaring: "Liberty is only a hamlet in the interior of a region that has no direct commerce with foreign countries. In the surrounding area there are only about thirty French residents, widely scattered, & living in a situation close to destitution." . . .

I'm always so glad when I click over to visit your blog rather then just read it in a reader - I just love the "atmosphere" over here!!!

Diana, thank you so much for the sweet comment. I look at this site as my "home" on the WWW and I strive to make it a welcoming atmosphere, hoping all will feel "at home" here. And believe me -- this "home" is MUCH better organized than my actual residence, which has the "genealogy piles" ALL over the place!

Your article on SNGF reminded me of one of my alternative choices - to visit my Republic of Texas-era ancestors, the Brinlee brothers, to ask whether they actually committed those murders they were charged with during Republic days.