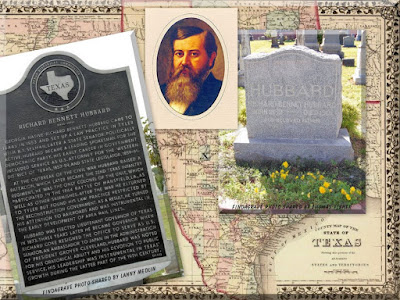 
Houston Daily Post, Saturday Morning, July 13, 1901 Tyler, Texas, July12.--This afternoon at 1:10 o'clock, at his residence in this city, Hon. Richard B. Hubbard, ex-governor of Texas, died after an illness of over a month. He had an attack of erysipelas last April which left his constitution in a weakened condition and about a month ago he was stricken with cystitis, which resulted in his death today. His son-in-law and daughter, Ernest H. Griffith and Rhena Hubbard Griffith; his unmarried daughter, Miss Searcy Hubbard, and grandchildren, Richard Hubbard Mansfield and Louis Mansfield, were at his bedside when he passed away. The funeral will take place from the residence of Mrs. and Mrs. Griffith tomorrow afternoon at 4:30 o'clock. While the death of Governor Hubbard was not unexpected, the fact came as a great shock to his home city and county where he had lived for half a century. It is not too much to say that, although Tyler has produced many prominent men at the bar and in politics, Governor Hubbard was the most widely known. He had been a distinguished figure in the State for nearly fifty years and his fame as an orator was not excelled by any Texan living or dead. The bar held a meeting this afternoon and adjourned until tomorrow, when suitable resolutions will be passed in regard to his death.

Wow, that must have taken a LOT of research! Goodness! I enjoyed this blog entry.