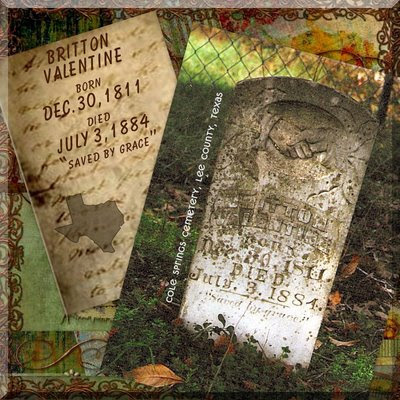 Mr. Valentine was married to Matilda, who was a sister of my 3rd great-grandpa, Richard C. West, Jr., of Mississippi.

The Valentines were a part of a group of people who came to Lee County, Texas from Oktibbeha County, Mississippi shortly following the end of the war between the states.

The Republic of Texas had granted to Daniel Walker a league of land in north-central Lee County on 10 February 1846 and out of this in a few years developed the small community of Cole Springs.


Records show that Britton Valentine, who had purchased a tract of land from Caroline Hill in 1877, deeded two and one-half acres of it for the use of a Baptist Church in 1879. . . .


A small private cemetery near the church contains three markers that have survived the years. They bear the names of Britton Valentine, Matilda Valentine (his wife), and Siobbell, wife of M.G. Welch. . . .

Cole Springs was a community in Lee County located about four miles west, and slightly north, of Tanglewood. One building that served as both a church and a school was there. . . . An elderly couple, Mr. and Mrs. Britton Valentine, are buried in the tiny cemetery there, near where the church used to stand. Mr. Valentine had markers made for their graves before either of them died. On his marker he had the inscription, "Saved by Grace," and on Mrs. Valentine's marker the inscription was, "If ever saved, saved by Grace." . . .

Very nice tribute to this member of your family. Beautiful.