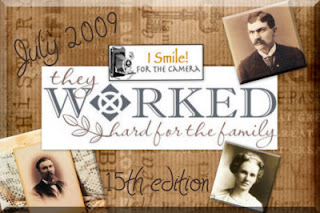 The man in the lower left is my 2nd great-grandpa, Atwood F. Smith (1837-1907), who died of blood poisoning following an injury at work.

In the upper right is his son, and my great-grandpa, Thomas Warren Alonzo Smith (1866-1920), who ran a landscaping & florist business in Biddeford, Maine.

The woman is Eva Mae Smith, wife of T.W.A. Smith (& my great-grandma), who carried on for a while with the florist business following the death (by his own hand) of her husband of 25 years.

The word prompt for the 15th Edition of Smile For The Camera is "they WORKED hard for the family." The professions of our ancestors are almost as interesting as the people themselves. Some of our ancestors worked very hard; they took in laundry, worked the land, raised many children, or went to school and became professionals. 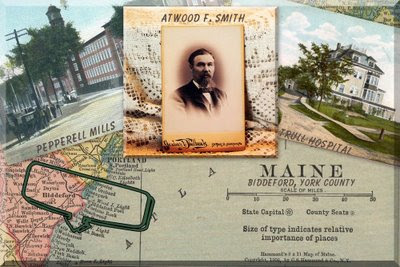 Death of Atwood Smith at Hospital.


Atwood F. Smith, one of Biddeford's best known & highly respected residents & also a veteran of the Civil war, died Friday night a little after 6 o'clock at the Trull hospital. His age was 69 years & ten days.


Mr. Smith was taken to the Trull hospital a week ago last Wednesday suffering from blood poisoning in his right hand. He cut his thumb while doing repair work in the Pepperell carpenter shop where he was employed for many years. He went to the shellac pot & stuck his thumb in it, which is often done, & covered the cut with the shellac & hiso [sic] put on a piece of leather to keep the dirt out. The shellac, it seems, had been "cut" with wood alcohol.


Mr. Smith took no more notice of it until a week ago Sunday. He attended the G.A.R. services at the Advent church on that day & was enjoying good health. On his return to his home he complained of being sick & said his thumb was bothering him.

Monday morning he was in a bad condition & Dr. Randall was sent for. He found the thumb badly swollen & colored & after learning the facts the physician saw it was a case of blood poisoning. He treated Mr. Smith at his home up to a week ago Wednesday & noticing that his condition was growing worse, the doctor had him removed to the Trull hospital. Mr. Smith made a decided improvement at once, & everything looked favorable for his recovery. The hand appeared to be getting better & Mr. Smith told his son, T.W.A. Smith, the florist, he hoped to be able to return home in a few days.


Friday morning between 6 & 7 o'clock Mr. Smith had a bad attack of heart failure & his son was sent for. The patient rallied, however, & up to 3 o'clock he appeared to be gaining from the morning attack. He had another spell of heart failure at 3 o'clock, from which he did not recover. At the time of his death the private nurse was changing his clothes, which was done at his request. The lady had not finished her work when Mr. Smith suddenly expired.


The deceased has been a resident of Biddeford many years. He was born in Hollis, & was the son of Hiram B., & Betsey T. (Flood) Smith. He received a public school education & during the Civil war enlisted with Company F., 27th Me. Regiment.

He was of a quiet disposition & a rugged constitution. He possessed all the qualifications for a good citizen. He was a member of Sheridan Post, G.A.R. & Laconia lodge, I.O.O.F. Mr. Smith was a regular attendant at the Jefferson street Free Will Baptist church. In politics he was a staunch Republican.


Besides his son, T.W.A. Smith, he is survived by two brothers, Josiah H., of Biddeford & Sylvanus Smith of Concord, N.H. The funeral will take place Sunday afternoon at 3 o'clock at the late residence 43 Prospect street. The G.A.R. service will be performed at the funeral by members of Sheridan post. 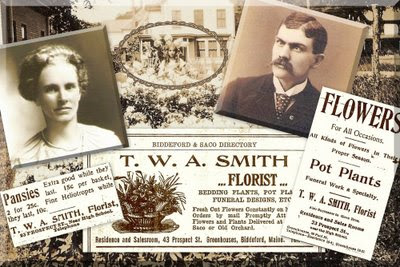 My maternal great-grandparents -- T.W.A. & Eva Smith -- were in the landscaping & florist business in Biddeford, Maine.

The Smiths had one daughter -- Elizabeth Marilla Henry nee Smith (1912-1932) -- who is my maternal grandma. A childhood friend, Diantha, wrote that, "The whole block from Foss St to Prospect street was filled with gardens & greenhouses I remember from a little girl – walking by to my aunts & grandmothers."


York County has many efficient florists & fine conservatories, & among them is T.W.A. Smith whose finely equipped hot houses are at 43 Prospect street & also at 163 Pool street.


Mr. Smith is an experienced & practical horticulturist & landscape gardener, & has an unexcelled reputation for the excellence of his work. Palms, ferns, lilies & potted plants are extensively dealt in, & a specialty made of cut flowers for funerals & social functions. Artistic & handsome floral designs are also supplied with prices always reasonable. Orders are taken & delivered for 15 miles around. Capable & experienced help to the number of four are employed, three acres of land & 10,000 square feet of glass occupied.


Mr. Smith was born in Lewiston, & educated in the public schools of Biddeford. He established his present business in 1895, & has built up a large & lucrative business. Mr. Smith is a member of the Masons, I.O.O.F., Encampment & Rebekahs, K. of P. & Red Men & is a past officer in the I.O.O.F. & K. of P. Mr. Smith is highly esteemed as a business man & citizen.


Mr. Smith is most ably assisted by his wife who has had 12 years experience, which has made her an expert at her chosen vocation.

I very much enjoyed reading your posting. The scrapbook collages are wonderful.

You did a wonderful job on the collages - great idea!

Read about the 1906 fire that destroyed the immediate predecessor to the Trull Hospital pictured above . . .