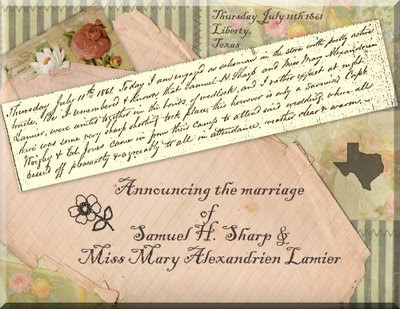 Be it remembered & known that Samuel H. Sharp & Miss Mary Alexandrien Lamier, were united together in the bonds of wedlock, & I rather expect at night there was some very sharp shooting took place, this however is only a surmise. Capt. Wrigley & Ed. Jones came in from their camp to attend said wedding, where all passed off pleasantly & agreeably to all in attendance. Weather clear & warm . . .

While we have no idea as to whether or not our Sam & Nellie had a wedding cake, the following recipe from an 1841 cookbook is mayhaps similar to one that might have been used if they did indeed have a cake . . .


The American Frugal Housewife
Dedicated to Those who are Not Ashamed of Economy
By Lydia Maria Francis Child: