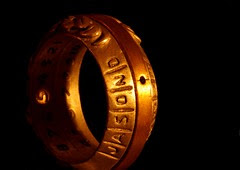 In our family history . . . in the spring of the year 1152 . . . the 15-year marriage of Eleanor of Aquitaine to King Louis of France is annulled at Beaugency . . . famous for her beauty and wit, this Eleanor is believed to be a multiple great-grandma to our Josephine . . .


And in the spring of the year 1152, it is said that the 30-year-old Eleanor gave to a 20-year-old Henry Plantagenet (King Henry II) of England, a special "portable" sundial . . . known as an Aquitaine Sundial or Aquitaine Ring . . . supposedly because when he was out hunting (which he frequently did) he tended to forget about scheduled appointments, and was frequently late for their "dates." Apparently the "pocket watch" helped, because negotiations continued between Eleanor and Henry of Anjou . . . and soon Eleanor marries Henry II at Poitiers . . . the story told in "A Lion in Winter" is a part of the tale of this Eleanor and Henry . . .


ELEANOR OF AQUITAINE, queen of France and afterward of England: b. 1122; d. Fontevrault, France, 1 April 1204 . . . married to Louis VII. She was gay, frivolous, a lover of poetry and art . . . accompanied him on the second crusade to the Holy Land in 1147 . . . they were divorced 18 March 1152. A short time afterward she bestowed her hand upon Henry Plantagenet, the future Henry II of England. . . . She bore him many children, but his infidelities and neglect changed her love into hatred. She incited her sons Geoffrey and Richard Cœur de Lion to rebel against their father, was imprisoned in 1174, and remained in confinement until after Henry's death in 1189, when she was released by his successor, Richard I, who placed her at the head of the government on his departure for the Holy Land. She negotiated his marriage with the daughter of the king of Navarre, and went to Germany with his ransom from captivity. She afterward retired to the abbey of Fontevrault and surviving Richard, lived to see him succeeded by one of her other sons, John Lackland, the signer of Magna Charta. She was a favorite personage with the troubadour poets of the day and appears in a very different light in their works from that in which she is represented by French and Norman chroniclers. Consult Adams, "History of England, 1066-1216" (London 1905). Google Books. The Encyclopedia Americana: a library of universal knowledge, Published by Encyclopedia Americana Corp., 1918