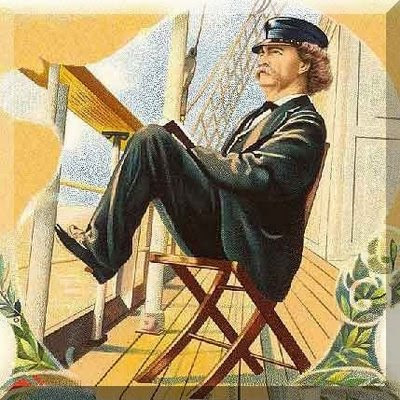 Image from the Dave Thomson collection

An interview with Twain was published in 1881 which was entitled, Mark Twain's Preparations for a Possible Encounter With the Comet . . . and he is often quoted as making the following statement sometime in 1909 . . .


I came in with Halley's Comet in 1835. It is coming again next year (1910), and I expect to go out with it. It will be the greatest disappointment of my life if I don't go out with Halley's Comet. The Almighty has said, no doubt: "Now here are these two unaccountable freaks; they came in together, they must go out together.


TwainQuotes.com says that, "The visibility of Halley's Comet at the birth and death of Mark Twain is an exaggeration," and then makes reference to an essay by Louis J. Budd entitled Overbooking Halley's Comet . . . the link they provided is no longer working, but I was able to find the following text at the archive.org website . . .

Hagiographers of Mark Twain like to have Halley's Comet streaking across the sky when Samuel Langhome Clemens was born and then again when he died. This conjunction especially impresses people with a weakness for astrology. But Twainians should give that comet a rest (or stifle it with some stock‑phrase that better fits such a fast‑moving object).


Already warned about the pains in his chest, Twain himself helped start the gaping by declaring in 1909—according to A.B. Paine—that "I came in" with Halley's Comet and "I expect to go out with it." He did so only if we arrange the facts loosely.


Crucial to those facts is: what dates the coming and going of that comet? The sun is its hub; as Twain might say, it hardly suspects our earth of being in the universe at all. Astronomers use perihelion as one of the pivotal (no pun) dates of its schedule. That's when its orbit comes closest to the sun.


However, rubberneck fans of the comet date its fly‑bys by its visibility without a telescope. In Twainian circles that usually means, furthermore, visibility from our northern hemisphere.


In 1835 such visibility began in very late September, peaked on 9 October in England, and faded out before the end of that month. (Track "Comet" through the precisely indexed London Times.) An astronomer in New England calculated that visibility would peak there on 16 October. (Scan the New York Herald, available on microfilm, for the low level of interest in the United States.) Perihelion occurred on 15 November, and the next Clemens baby arrived on the 30th.


In 1910 the earliest, dim sighting without telescope was claimed for 29 April. Visibility in New York City—at a commuting distance from Redding, Connecticut—peaked on 18 May. Twain had died on 21 April, the day after perihelion. To book Twain for a round trip by the criterion of the comet's closest approach to the earth, equal opportunity would have to include anybody born in the northern hemisphere up to at least six weeks before or after mid‑October 1835 and dying within the month before or after 18 May 1910. We don't need demographies to suggest that many women and men would have qualified for boarding‑passes. (As for how many when the best telescope was used—sheesh!) Halley's Comet was not Twain's unearthly Air Force One. There's enough that is unique and even uncanny about Twain without our hyping the facts. In sober truth he had—to bowdlerize Twain—a "quadrilateral astronomical incandescent" career.

Hi,
Thanks for the info on the 'Mark Twain/comet' connection. I was researching Clemens and found your site. I'm trying to figure out if my husband is related to the author and noticed that your aunt Josephine is/was.

My husband's oldest brother has followed the family line on their father's side which goes waaaaay back. But their mother's side is a bit of a mystery. With the timeline link you provided it may give me a place to start.

My husband's resemblance (and temperment) to Clemens is uncanny. So much so that he portrays Twain in parades and such here in California from time to time. Photos of him are at www.redmonstone.com/MarkTwain.html

thank you for all the work you've put into this site.
-Jane