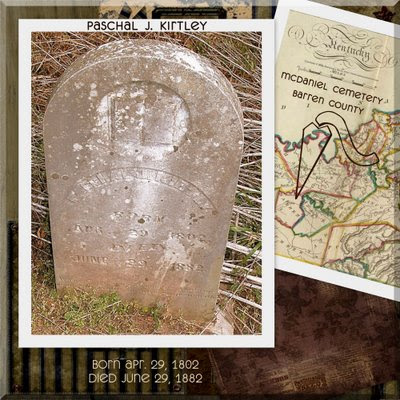 I first met this man and his family back in the 1990s while searching census records at a local library . . . I was looking for some clue as to the parentage of my 2nd great-grandpa, William Paschal Henry (1836-1912) . . . whose remains reside in the Murray Cemetery in Milam County, Texas . . . and I found a 14-year-old William P. Henry enumerated in the Paschal J. Kirtley household on the 1850 Census for Barren County, Kentucky . . . my first feeble attempts at establishing a connection between the Henry and Kirtley families were unsuccessful . . . but once I began conducting genealogy searches online, I was able to locate a few Kentucky marriages between Kirtley women and Henry men . . . including an 1835 Barren County, Kentucky marriage record for a Thomas Henry and a Mary Kirtley (one of the orphaned sisters) . . . and they wound up being the 3rd great-grandparents I was looking for! So . . .

Thank you, Uncle P.J., for watching out for your little sister (my 3rd great-grandma), Mary, and for helping take care of her son, William P., after his father died.

How profound to have sought and found the stories of men and women from long ago.

Just goes to show our own life's stories are woven from threads of others in the past.

I really loved the layout showing the gravestone and the location...it's given me some ideas for something I'm doing.

Your information is always presented in such a meaningful way - I like to actually visit your site rather than just look at it through a reader so I get the full effect!!