My favorite Bette Davis movie happens to be one of the last ones she was in -- The Whales of August -- which was filmed on location in Casco Bay off the shore of Portland, Maine . . . the film was shot a few miles down Casco Bay from the site of David Berry's family cottage on Peaks Island, from where, in fact, the characters and story were drawn when Berry wrote the original play that was the basis for this movie . . . 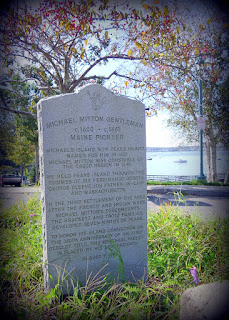 
. . . Peak's Island in Casco Bay is just two miles from downtown Portland. It once was owned by Michael Mitton, son-in-law of Portland's first settler, George Cleeve. According to legend, Michael was out alone fishing in his dory when a triton swam up to his boat. Michael tried to fend off the monster with an oar, but the triton grasped hold of the side of the dory. Afraid that the triton could capsize the little boat, Michael seized a hatchet and, with one mighty blow, severed both hands of this son of Poseidon. To his horror, Michael Mitton saw that the monster's hands remained fastened to his boat. He could not pry them loose. It was then that Mike heard the haunting sound of the triton's conch, and at the sound, the severed hands gave one mighty effort at rocking his boat, finally flipping him into the water and swamping the dory. Michael drowned that day. . . . from Haunted Maine by Charles A. Stansfield, Jr.